He wore a white Bruno-Tyson T-shirt with a flip phone fastened to the belt loops in his jeans.

There was a boxing man’s aged wisdom in his eyes and physical signs of a career inside the ropes.

He leant against the strands of the ring, passing nuggets of information to a young hopeful inside.

You could tell he was an old fighter even though he wasn’t shouting about it and even though there were no crowds around him.

Hedgemon Lewis was training fighters at the now defunct Nevada Partners Gym in Las Vegas. It must have been more than 15 years ago.

Former boxer and referee Richard Steele used to own the place and he allowed Hedgemon and I time in his office for an interview.

Lewis’s story was unique, entwining celebrity, boxing and family. He was born in Alabama, moved to Detroit and then headed out west.

Hedge had this story about how he visited his local rec center to go swimming when he was a troublesome and bored boy. As kids do, he and friends ended up making mischief, toppling trash cans and so on.

Someone who worked there barked at them to go upstairs to the boxing club and talk to a man called Duke Ellis. He would help them let off steam.

“Duke Ellis was damn near 90 but he had trained Joe Louis,” recalled Lewis.

Hedgemon boxed in a tournament aged 12, weighing no more than 105lbs soaking wet, and as a decorated amateur he wound up losing in the Olympic trials to Charles Ellis, brother of former heavyweight Jimmy.

By now the talented Lewis was working with Luther Burgess, who had been trained by the legendary Eddie Futch. It got to the point where Luther thought his old coach should take a look at Hedgemon, so he went out to the West Coast.

Futch fell for the velvety-skilled Lewis and wanted to work with him on the condition that Lewis moved from Detroit but Hedge didn’t want to leave his mother. 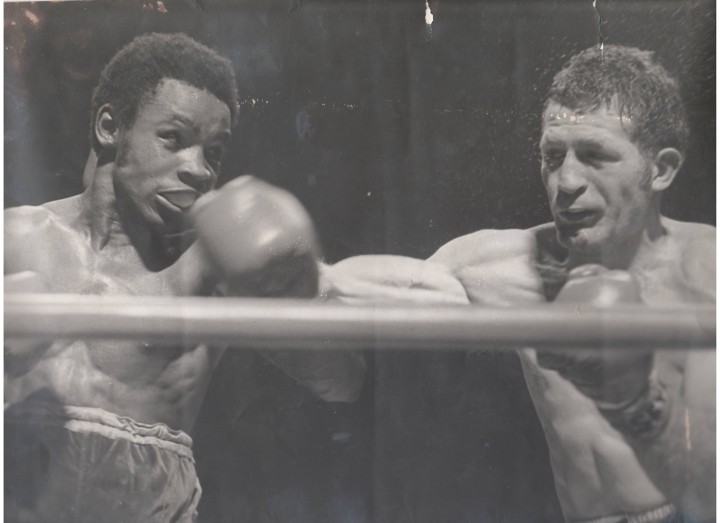 Eddie said he’d taken quite a few fighters out to the West Coast but none had stayed. Hedgemon eventually stayed and would end up calling Futch a father figure.

To make it work financially, Futch and Lewis built a consortium of investors and the likes of singer Robert Goulet, actor Ryan O’Neal and Billy Cosby joined forces.

It all started when O’Neal was having his hair cut by Hollywood barber Jay Sebring, who along with Sharon Tate would later be murdered by the Manson family.

“It was 1966, and one of his hair cutters was an ex-boxer, and he was trying to put together a corporation to manage this fighter out of Detroit,” O’Neal remembered to the Detroit Free Press back in 2016, while explaining how his ex-wife gave him the money to invest.

“We had this wonderful relationship,” he continued of his time with Lewis. “He grew up in the Brewster Projects. He had a rough early life. He was a black man and I was a white man. There were a lot of problems going on in those days, but not with us. … “We went around the world together.”

“What would I say if I saw Stracey again,” he asked me rhetorically when old and greying.  “Congratulations John, you won the fight. Let’s do a rematch.”

He retired with a 53-7-2 record. More a smooth boxer than ballistic puncher, there were 26 knockouts victories.

He’d told his mother he’d call it a day when he was 30 and he was that age when he fought John H.

“Rest in peace Hedgemon Lewis,” tweeted Michael Spinks this week. “Hedgequarters as we called him, was a good friend of mine. I will miss him. So sorry he had to leave.”

Patrick O’Neal, Ryan’s son, said on social media, “He was a tremendous boxer who my dad managed in the late 60’s and 70’s. He fought for the welterweight championship belt 2 or 3 times. Hard fought losses. One was a downright awful split decision. RIP Hedge.”

Lewis maintained he was robbed in the first Napoles fight.

By the time I met Hedgemon in around 2004, he’d been living in Las Vegas for 20 years and he later stayed in an assisted living home back in Detroit. He’d almost gone full circle. He would have gone back to Alabama last year for his induction into their Boxing Hall of Fame, but was too unwell to do so.

“I can’t complain,” he smiled that summer’s day in Vegas more than 15 years ago. “It’s been a good life.”

The boxing world takes another hit.RIP

When this news reach me, again I was sad. Is killing our beloved boxers who are retire. Rest in Peace Champ Hedgemon Lewis, thank you for sacrificing for all of us in your fights. I am forever in gratitude. :sad2:

Hegemon fought the very best of his era and gave as good as he got. Thanks for the great fights. RIP

Rest in peace champ. This thing is no joke. I watched those fights, Napoles ruled the age with an iron fist. Hedgemon went to war win or lose.