Gonzalez: Stevenson's Not Champ; Why Fight In His Hometown?

LAS VEGAS – Joet Gonzalez made some demands during negotiations for his upcoming featherweight title fight against Shakur Stevenson.

Among the things Gonzalez wasn’t willing to do was fight Stevenson in his hometown of Newark, New Jersey. Stevenson’s last fight took place July 13 at Prudential Center in Newark, but Gonzalez saw no reason to afford Stevenson a home-ring advantage.

“It was very important,” Gonzalez told BoxingScene.com following a recent press conference at MGM Grand to announce their fight. “Obviously, [Stevenson] is an idiot. How’s he gonna fight in his hometown when the belt’s vacant? If he was the champion, I would definitely go out there. If he’s the champ, I’ve gotta go out there, to his hometown, and do what I’ve gotta do. But the belt’s vacated, we’re doing it in a neutral spot, 50-50, and let the best man win.” 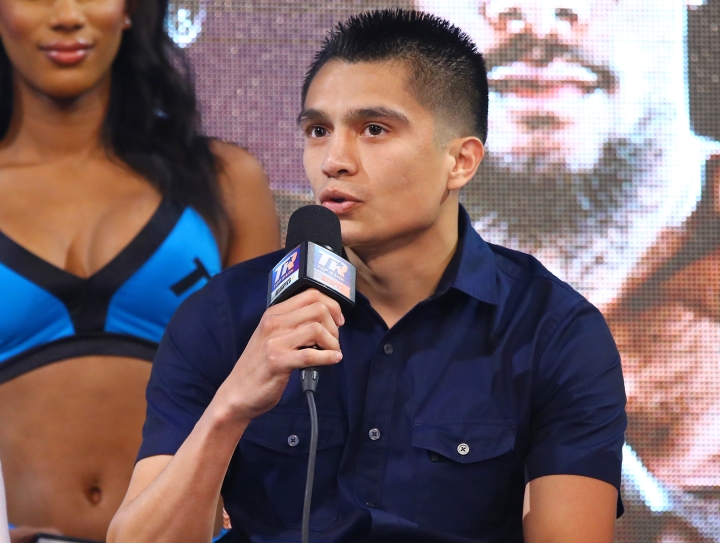 Stevenson isn’t exactly pleased with the site for their fight.

“They said they wanted to keep it on neutral ground, and we’re fighting in Reno,” Stevenson said. “I don’t think that’s neutral at all. I feel like California is a drive away [for Gonzalez and his fans]. You can drive there. … I just feel like Reno wasn’t [neutral]. But I fight better going into somebody else’s territory.”

Gonzalez is from Glendora, California, more than an eight-hour drive from Reno. He hasn’t fought in Reno since he was an amateur and Gonzalez doesn’t feel he has any advantage over Stevenson by boxing there.

Stevenson, an Olympic silver medalist in 2016, still will treat this fight as if he’s heading into his opponent’s hometown.

“As an amateur, as a kid, I grew up kinda going overseas,” Stevenson said. “I usually fight the people that was from there in the finals, and I always – that’d be my best performances. I would perform better when I’m in somebody else’s hometown. They boo me and it kind of fire me up.”

[QUOTE=Sweet Scions;20072842]You don't think Teofimo's last was a decent step up? Other than this I concur[/QUOTE] Not really a step up imo the fight was just a little harder than expected. Even if it was a step up it wasn't…

Much better for Shakur to fight In Reno ,So after he gets the quick To win ,he can celebrate get up in Joets sisters Guts

Pretty sure Arum had to concede to the location since the fight is going to be on ESPN+ and not DAZN. It's not really a big deal. If you're the superior fighter, you should be able to win anywhere.

[QUOTE=Bronx23;20072841]Not at all as familiar with Gonzalez as I am with Shakur. What are his realistic chances? I'm ready for Stevenson, Haney, Tank, Ry Garcia & Teofimo to graduate from fighting bums & up the competition. Put all 5 of…

Not at all as familiar with Gonzalez as I am with Shakur. What are his realistic chances? I'm ready for Stevenson, Haney, Tank, Ry Garcia & Teofimo to graduate from fighting bums & up the competition. Put all 5 of…