Back in February, Canelo came up positive for the banned substance clenbuterol in two separate tests.

The positive tests would lead to a six month suspension from the Nevada State Athletic Commission - and it forced a May date for the Golovkin rematch to get pushed back to the fall. 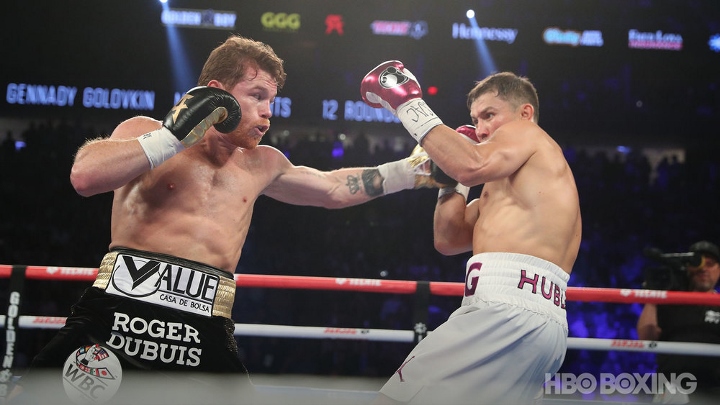 The two boxers finally met in the ring last Saturday night, at the T-Mobile Arena in Las Vegas.

And Canelo came away with a twelve round majority decision victory - and Golovkin's WBC, WBA middleweight titles.

Golovkin suffered the first defeat of his career as a pro.

In the first bout, the two boxers fought to a controversial twelve round split draw at the same Las Vegas venue.

In the build to the rematch, Sanchez had ridiculed Canelo for using too much movement in the first contest.

And second time around, Canelo came forward and took the fight to Golovkin, who was backing up for much of the contest.

Sanchez praised Canelo for his performance and believes the entire drug testing scandal is now officially a thing of the past.

[QUOTE=Chuckguy;19121406]You are a fawking idiot. Two close fights where even canelo fan boys admit that they could have seen the fights in GGG favor. But some how you see a schooling and say stupid sh it like borat[/QUOTE] I thought…

[QUOTE=bigdunny1;19122311]Who would of thought right? Loud mouth sanchez is the only adult in the GGG team. GGG running out the ring like sore loser bytch, Loeffler running his yap in interviews and twitter about the judges robbing GGG. And the…

[QUOTE=aboutfkntime;19121287]props to Abel for showing more class than Golovkin's shltty fanbase[/QUOTE] Who would of thought right? Loud mouth sanchez is the only adult in the GGG team. GGG running out the ring like sore loser bytch, Loeffler running his yap…

[QUOTE=aboutfkntime;19121285]so, Golovkin was not superior to Canelo in any of the 4 official scoring criteria?[/QUOTE] No he wasn't. You can say they were even in that category if you balance out the different things they did. GGG landed a few…

[QUOTE=Chuckguy;19121451]No I’m asking for specific names of posters I’m just curious time[/QUOTE] Jab Jab Boom, Mirus, TonyGE, Diego Rodriguez..... and a HUGE bunch of others cruise any thread that mentions Canelo since the fight I have replied to about..... 100…