Currently Gennady Golovkin (38-1-1, 34 KOs) is one of the few marquee fighters who isn't currently aligned with a network or streaming platform. For years he was associated with HBO Sports, which announced a few weeks ago that they were getting out of the boxing business in 2019.

It was announced recently that Saul "Canelo" Alvarez had signed a long-term and lucrative deal with streaming service DAZN.

So does this impact Golovkin's decision, at all? 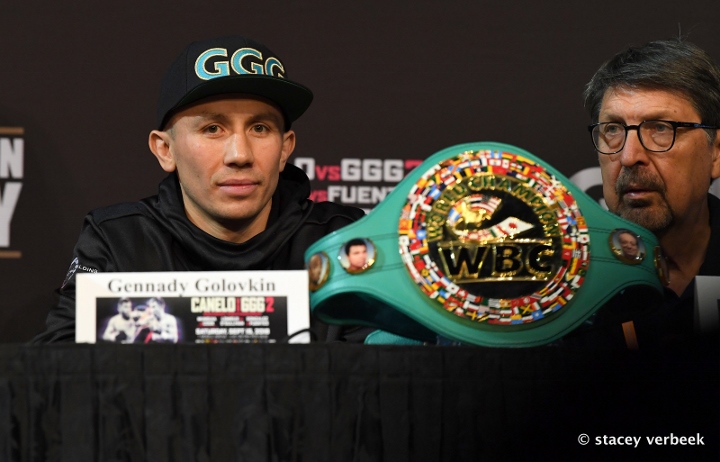 Tom Loeffler, the head of GGG Promotions, told BoxingScene.com - "Look, we're happy for 'Canelo', it's a good deal for him, it sounds like a good deal for Golden Boy(Promotions). We're getting a lot of interest from many different platforms for Gennady and we'll make the best deal for 'Triple G' that we can.

"There's three fighters that move the needle in boxing, whether it's pay-per-view or subscriptions: that's Anthony Joshua, 'Canelo' and 'Triple G'. So you could say that 'Triple G' is the most sought after free agent right now for a TV deal and I think the great thing is the overwhelming majority of the fans and media think that he won the second fight (with Alvarez) or at least should've kept his titles. So his popularity, on paper - even though he lost his titles - feels like it's gotten even bigger after his last fight."

On September 15th, Golovkin lost his middleweight titles in a razor thin majority decision to Alvarez in their rematch.

Loeffler says that Golovkin went back to his home country of Kazakhstan and is now in Germany tending to some business.

"When he gets back I'll sit down with him and go over his options,'' said Loeffler, who believes that, "the great thing is now it sounds like fighters aren't afraid to fight him and it'll be a lot easier for me to negotiate the deals. here's some big names out there, including 'Canelo' that would make for some great match-ups for 'Triple G'."

So are they looking for a long-term deal or one-offs?

"I think it depends on the overall structure," answered Loeffler. "If it makes the most sense to go on a fight-by-fight basis, we'll look at that. If there's a lucrative deal that's multi-fight, we'll be looking at all the options and see what's best for 'Triple G'. I had a conversation with (Golden Boy Promotions president)  Eric Gomez last week, that we would look to keep our options open, regardless of what direction we went to, to keep a third fight with 'Canelo' open."

As for when Golovkin will return, regardless of his opponent, Loeffer stated, "Realistically next year, first quarter, whether it's between March, April or May, in that time frame because he'll take off the rest of this year. He'll spend the holidays with the family and then I can see him getting back into training mode at the end of January, something around that time frame.

Can see him joining Dazn

[QUOTE=j0zef;19205004]He should make up his mind soon. The more time goes by the less leverage he has. Canelo jumped on DAZN's billion$ worth quickly. If Golovkin stretches this out, he may be forced to take the leftovers.[/QUOTE] Eh. I think…

[QUOTE=bigdunny1;19204538]He ain't getting 20 m from Japan a fight that will do no business in other markets because the time zone. Will air on ESPN Sunday morning like 9am lol he will get paid similar to what he got to…

[QUOTE]whether it's pay-per-view or subscriptions: that's Anthony Joshua, 'Canelo' and 'Triple G'. So you could say that [B][SIZE="3"]'Triple G' is the most sought after free agent[/SIZE][/B] right now[/QUOTE] oh really Tom..... in that case I cannot wait to hear your…

[QUOTE=TheCell8;19204862]Not necessarily. They would likely have the fight a 11AM in Tokyo to accommodate the American audiences. That's what they did with Pac-Rios.[/QUOTE] The entire premise of the fight is to suck every penny and revenue out of the Japan…