Golovkin Promoter: GGG Will Have Final Say on 42.5 For Canelo

So will WBC, WBA, IBO middleweight champion Gennady Golovkin (38-0-1, 34 KOs) accept the latest - and last - offer made to him by Golden Boy Promotions for the rematch against Saul Alvarez, which would see him get a 42.5-percent split versus the Mexican star?

He has till high noon tomorrow to make a decision or Golden Boy and 'Canelo' will move forward with another fight in September.

"It's going to be up to Gennady," said Tom Loeffler, the head of 'GGG Promotions, to BoxingScene.com. "He's in Moscow right now, he's at the opening ceremony (of the 2018 World Cup) at the invitation of Hublot and so I'm just waiting to hear back from him." 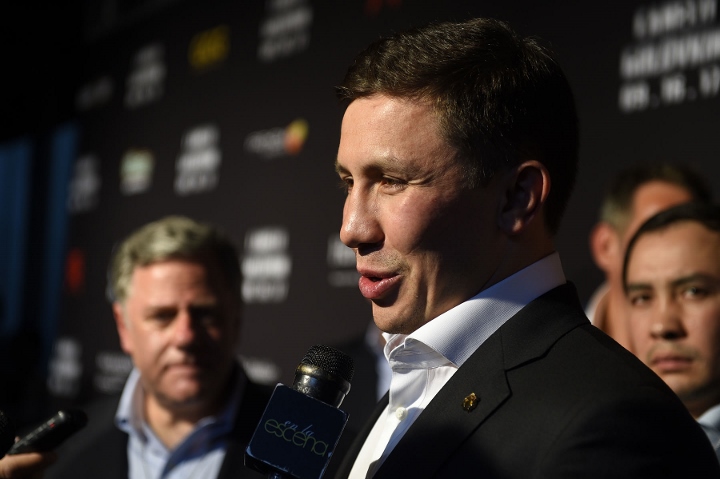 The two sides are getting closer with the monetary split.

Initially Golovkin wanted an even 50-50 split, but then backed away and was willing to take a 55-45 in Canelo's favor.

As it stands for the moment, Canelo and Golden Boy have made their final offer of 57.5 to 42.5.

"He made it clear before that he would come down from 50-percent to 45-percent and in order to make the deal he'd give 'Canelo' the A-side treatment. We're very close, Golden Boy just came up to 42.5-percent and they made it pretty public. So Gennady is going to be the one to make the final decision just like 'Canelo' will on his side. So I'm just waiting on a response from Triple G," Loeffler said.

Asked when he would speak to his client, Loeffler told BoxingScene - "it's going to be early morning tomorrow because of the time difference."

Last September the two fought to a disputed draw with Golovkin keeping his middleweight titles. A rematch was scheduled for this past May 5th but was cancelled as the Mexican star tested positive twice for clenbuterol and was suspended six months by the Nevada Athletic Commission.

[QUOTE=Django1;18867180]I Googled that. Nothing to do with guns.[/QUOTE] In a round about way it does. Agenda21/31 outlines the framework for a one world government under United nations guidelines. This is a goal of globalists and involves the control of who…

[QUOTE=OldTerry;18861536]And Patriots free themselves from Tyrannical Governments. When the only people that have guns are the police and the Federals then what you have is a police state. First they take away your right to have a gun then they…

[QUOTE=OldTerry;18861516]So you are saying that perhaps he is Christian by faith but Muslim by ethnicity?[/QUOTE] I'm trolling bc I dont like Gennady fanboys. Dude is Christian probably, but acts like prima donna Cotto (later career) and gets a pass by…