Golovkin - Has the Moment Passed?

It was one of the sport’s longest running stories.

Beginning before he even became a fixture on HBO, the legend of Gennady Golovkin was building. He was the guy Felix Sturm was avoiding until he was the guy Sergio Martinez…then Miguel Cotto…then Saul Alvarez was avoiding.

Then the avoiding stopped. Like Bernard Hopkins close to a generation before, Gennady Golovkin arrived at his mid-30s with a chance to cement his place as the middleweight of his time. In some eyes, Golovkin did.

The decisions in both contests with Alvarez were hotly debated, particularly the first with its wild Adelaide Byrd scorecard. Debated or not, the official verdicts read a draw and a loss.

He didn’t close the show.

This Saturday (DAZN, 9 PM EST), a now 37-year old Golovkin (38-1-1, 34 KO) returns to the ring for the first since his loss to Alvarez last September. Speculation is heavy that a win will result in a third contest with Alvarez, a third chance to put the official exclamation point on his years in the division Golovkin doesn’t have yet.

To be sure, the business interest of the sport aligns with Alvarez-Golovkin III. It was the most lucrative fight in the world in 2018 and, given their investment in Alvarez, DAZN has to want it bad. No other available fight has the potential to drive subscriptions like Alvarez-Golovkin III.

Couple it with the boost in publicity Andy Ruiz’s upset of Anthony Joshua scored for the streaming platform, and the likelihood their rematch will also head to DAZN, and the fiscal incentives are clear.

The fistic incentives are there too. 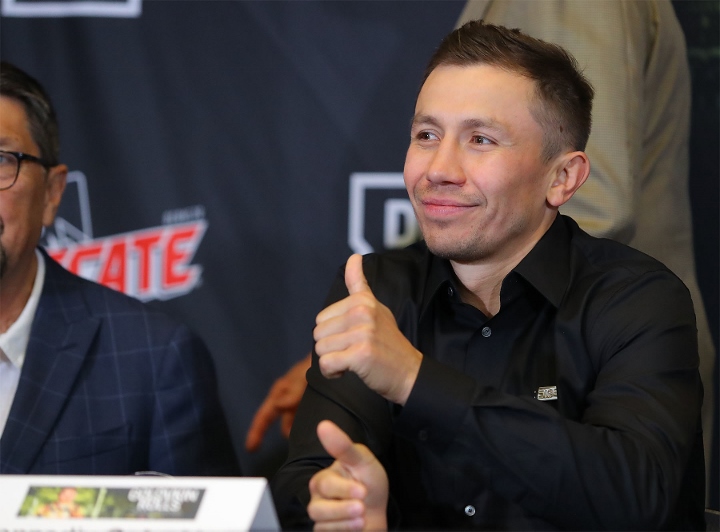 For fans of Golovkin, it would be an exorcising of more than just a single foe for their favorite fighter; it would be the resonant validation they’ve waited for in their fandom all these years. It might even be sweeter after the setbacks in the first two Alvarez fights. There has always been a feeling in the ardent Golovkin camps that their man has been victimized by a sport that didn’t provide a fair path to prove his talents.

Whatever truth there was to that, it was a notion well cultivated and monetized as Golovkin collected titles and was transformed into a solid gate draw in the US.

For now, Golovkin has to get by Canada’s 35-year old Steve Rolls. He is expected to do so but Julian Williams and Ruiz, in just the last few weeks, are a reminder not to ever take too much for granted. This will be the first time Golovkin has been without trainer Abel Sanchez in years. What will that mean?

Square pegs don’t die round but that doesn’t mean the edges always stay sharp. Will a new corner, a new approach, add some new wrinkles to Golovkin so late in his career?

It remains to be revealed. So too does the answer to what might be the biggest question hovering over Golovkin:

Has his moment passed?

Marquez’s win over Pacquiao was spectacular because it was script busting. Moments like that, for George Foreman’s win over Michael Moorer, over even Hopkins-Trinidad, stand out because special doesn’t happen everyday.

While both fights were competitive, Alvarez got better from the first to the second. In these eyes, that might have meant a win for Golovkin in the first fight and a draw in the rematch. Regardless, Alvarez narrowed the gap considerably in the second fight. In two performances since, Alvarez has looked like a man riding his biggest win into the flush of prime.

Golovkin is a lot of things. He’s still going to be a big puncher, his jab is still as heavy as one might see at middleweight, but prime he ain’t.

If the moment hasn’t passed, time is clearly not on his side.We won’t know for awhile yet, but one day we’ll look back and see the Rolls fight as either the beginning of the last big chapter in the Golovkin story or the opening lines of a career epilogue.

Both options are worth a look.

Oscar Valdez will defend his featherweight belt on ESPN Saturday and one wonders when he will be moved towards bigger fights. Valdez might not win them all but he’s as entertaining as anyone in the sport. With Josh Warrington heading to scratch next week on ESPN+, timing would be good to get the two of them together in a unification clash…The Black Mirror is back. ‘nuff said…One week until the WBSS cruiserweight semi-finals and count this corner as on the side of freeing up the belts in the division. If Oleksandr Usyk is leaving, and he is, let’s treat the tournament as what it kind of is anyways: the de facto replacement invitational…Maurice Hooker-Jose Ramirez is exactly how those two men should answer the Josh Taylor-Regis Prograis fight. Given both those fights are slated for DAZN, could we already be seeing the seeds for another showdown being planted?

[QUOTE=icha;19810912]i dont think i understand the bolded... when did canelo went back to 155? [B] canelo never fought above 155[/B] before the chavez fight, and he agreed to a ggg fight before even stepping in the ring vs chavez... you…

[QUOTE=turnedup;19812460]Switched accounts because I blocked your other ones? The only people who say Canelo won the first fight were the same people who were backing Canelo before the fight. Former fighters,the press, the general public all disagree with you. Besides…

[QUOTE=aboutfkntime;19810797]I agree with your sentiment, but..... Jacobs was a huge underdog, and was given NO chance to win NOBODY called Jacobs great before he fought Golovkin, they called him chinny if Golovkin won that fight, he beat a huge underdog…

[QUOTE=icha;19810912]i dont think i understand the bolded... when did canelo went back to 155? [B] canelo never fought above 155[/B] before the chavez fight, and he agreed to a ggg fight before even stepping in the ring vs chavez... you…