Golovkin: Joshua Was Not Mentally Prepared For Ruiz Fight

One week before his own return to Madison Square Garden, Gennadiy Golovkin took in a night at the fights at the famed venue for the United States debut of Anthony Joshua.

He didn’t at all like what he saw from the now-former unbeaten heavyweight titlist, who suffered a shocking 7th round stoppage at the hands of Andy Ruiz.

“This is boxing, everyone has a chance,” Golovkin (38-1-1, 34KOs) said of the evening’s upset during a recent media conference call to discuss his upcoming bout with Canada’s Steve Rolls this Saturday at MSG. “Anthony Joshua was not mentally ready for this fight.” 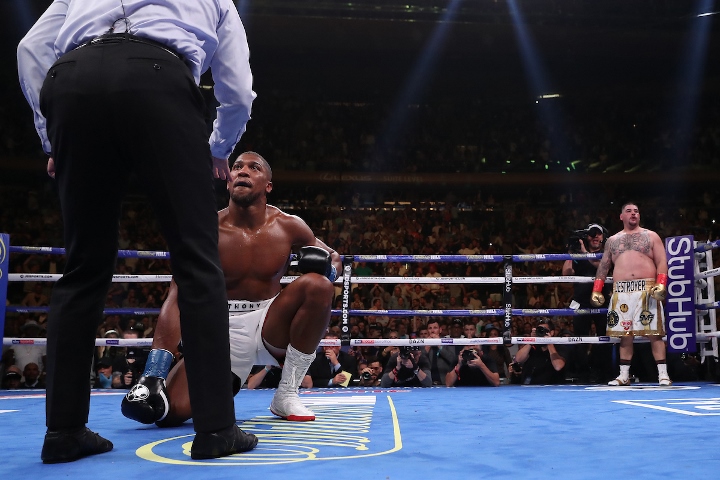 Preceding last Saturday’s DAZN headliner was a loaded fight week, which began with a VIP meet and greet barbecue on Memorial Day last Monday, followed by a slew of events all of which were well attended. Joshua’s U.S. arrival came complete with thousands of his fellow Brits flying over from jolly old England for the event, undoubtedly an enormous amount of pressure for any athlete to endure.

It was hardly a new development for Joshua (22-1, 21KOs) beyond fighting outside of the United Kingdom for the first time in his career. At home, the 2012 Olympic Gold medalist would play to record crowds, having drawn more than 300,000 combined in attendance for his previous four title defenses.

Of course, it simply made him popular—not invincible.

“It was his first fight in the United States and felt like a superstar, felt like Superman,” noted Golovkin, who fights for the first time since watching his own title reign come to a close last September. The 2004 Olympic Silver medalist from Kazakhstan managed to tie the all-time middleweight mark with 20 successful title defenses—matching that of Bernard Hopkins, whose title reign ran from 1995-2005.

Golovkin crammed more defenses into a shorter amount of time since winning his first belt in 2012, but couldn’t surpass the Hall of Fame legend as he dropped a disputed decision to Saul ‘Canelo’ Alvarez in their rematch last September in Las Vegas. The two fought to a draw one year prior in a bout where many believed Golovkin was horrifically robbed.

A third fight between the best two middleweights in the world has been discussed, further intensified by Golovkin following Alvarez to sports streaming service DAZN-USA where he makes his debut this Saturday in his showdown with Rolls (19-0, 11KOs), an unbeaten but unheralded middleweight from Toronto, Canada.

Alvarez made his platform debut last December in a 3rd round knockout of Rocky Fielding—also at MSG—followed by a 12-round win over Daniel Jacobs this past May at Las Vegas’ T-Mobile Arena, which hosted Alvarez-Golovkin I and II.

Golovkin’s last fight at MSG came in a March 2017 points win over Jacobs, extending his title reign but ending his knockout streak at 23 straight in going 12 rounds with the Brooklyn native. From there came the draw and loss to Alvarez, with a two-round knockout of faded Vanes Martirosyan wedged in between for his record-tying title defense.

With a win on Saturday, much of the post-fight discussion is expected to be centered around a third fight with Alvarez. First has to come the victory, which Golovkin—especially in light of what he witnessed first-hand just a few days ago—is not taking for granted.

“This is boxing. I respect my opponent,” noted Golovkin, refusing to entertain any talk of Alvarez or any other opponent not named Steve Rolls. “I understand this situation and am prepared for anything.”

[QUOTE=Andre_parker1;19806560]some good points , what's your prediction(likely sequence) on the rematch?...i believe Joshua will win the rematch and this chapter will only enhance the story of the legend in the making...life in general is filled with fickle people..one minute they're…

Seems true as Joshua had no plan B. He couldn't knock Ruiz out and had no plan that would get him to the finish line.

Joshua was dropped during spar and did not recover from concussion the reason why his dad was very upset with Hearn and tried to stop the fight before it started.

[QUOTE=j.razor;19807096]:cool2: So I guess this means Punk G wasn't mentally prepared when he fought Jacobs & Nelo?[/QUOTE] So you're actually comparing the way GGG beat Jacobs (Jacobs lost in case you weren't aware) and very questionably "lost" to Canelo to…

[QUOTE=nidaros997;19806442]Why do you think that? Joseph Parker fought both AJ and AR, and prior to the fight Parker said during an interview that Ruiz was the hardest puncher that he had faced to date. Thus, he considered Ruiz a stronger…