Golovkin: I'm Ready To Trade Punches With Canelo Until The End

WBC, WBA, IBO middleweight champion Gennady Golovkin (38-0-1 34 KOs) is hoping for a high contact fight when he faces Canelo Alvarez (49-1-2, 34 KOs) in a rematch on September 15th at the T-Mobile Arena in Las Vegas.

They first met in September 2017, in a contest which ended in a controversial twelve round split draw.

Golovkin, and a number of fans, expressed displeasure with the lack of fireworks in the first contest. 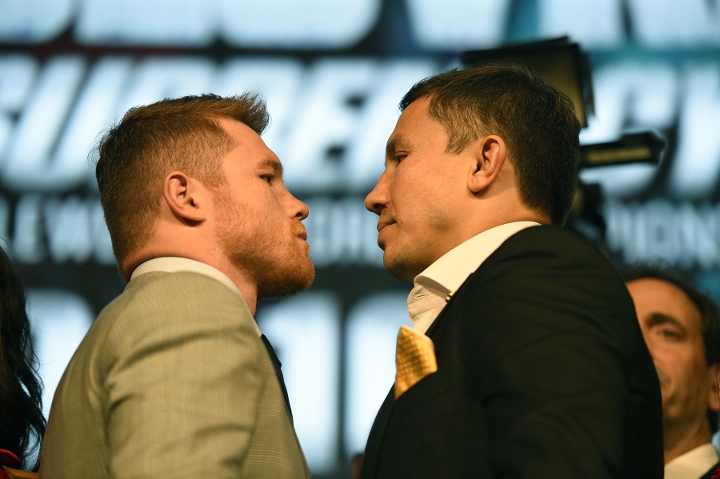 The first time around, Canelo used his boxing abilities and movement to frustrate the big puncher.

Both boxers believe they should have received the victory last fall.

In the rematch, Golovkin and Canelo have both promised to close the show with a knockout victory - to prevent the possibility of another controversial ruling.

Golovkin plans to fight his usual fight - he says the pressure is on Canelo to make a better fight for the fans.

"That's what I'm waiting for, (for Canelo to go on the attack), because that's what people have wanted for a long time. I am ready to trade punches until the end. In the first fight, he did not want to come forward," said Golovkin.

"Canelo is a great fighter and I have no doubt that we will give people the fight they are asking for. It will be a great evening for everyone that loves boxing. I'm not going to change my style. I always come forward, that's not going to change. Canelo is the one who needs to change."

For his part, Golovkin's head trainer Abel Sanchez said that - "Canelo said the same thing the first time they fought [that he would knock Golovkin out] and and they never did anything. Listen, I do not think Canelo is afraid, because someone who gets into the ring to fight with Golovkin can not be afraid. We'll see what happens in September. "

[QUOTE=fernandtg;18935322]Yup, because professional boxing judges are universally known for how unbiased and incorruptible they tend to be. Heck, you even went as far as including all 3 of them. In your eyes, most boxing journalists are less credible than Byrd's…

in 5 of those rounds..... ALL 3 judges awarded those rounds to Canelo in most of those 5 rounds Canelo won [B]CLEARLY[/B]..... whereas some of Golovkin's rounds were nip and tuck that he edged despite that..... " the majority "…

[QUOTE=TonyGe;18931732]Over all Golovkin landed only 2 percent less punches than Canelo a fighter who was primarily concerned with defense. Ring generalship. Golovkin controlled where the fight took place. All the ring behind Golovkin was cut off from Canelo because he…