Justice wasn’t exactly swift, but in the end it was ultimately served.

Franchon Crews-Dezurn was forced to wait more than four months before seeing her unified super middleweight title reign fully restored. The Baltimore-based boxer was initially on the wrong side of a split decision which landed in favor of Mexico’s Alejandra Jimenez (12-0-1, 9KOs; 1ND) to win the belts this past January in San Antonio, Texas.

The feat was doused in controversy roughly two weeks later when it was learned that Jimenez—a former heavyweight titlist—tested positive for the banned substance stanozolol. The official result was changed to a No-Decision by the Texas Department of Licensing and Regulation (TDLR) on February 10, shortly after the World Boxing Organization (WBO) issued a ‘Show Cause’ letter to Jimenez in order to clear her name. 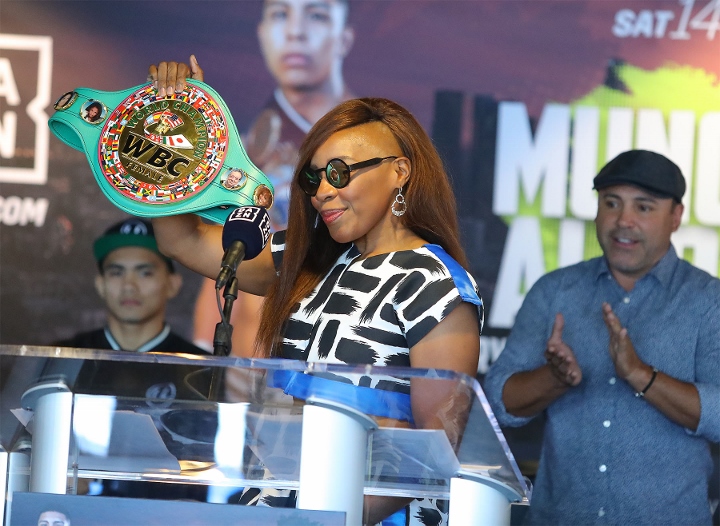 Crews-Dezurn saw her WBO reign restored in March, only for the World Boxing Council (WBC) to sit on its decision for another 2 ½ months.

Their ruling was finally rendered this week, with the WBC belt also being returned to Crews-Dezurn. The decision was long overdue, with even Oscar de la Hoya—founder and chairman of Golden Boy Promotions, Crews-Dezurn’s promoter—demanding action from the sanctioning body with whom he’s enjoyed a strong relationship since the early days of his Hall of Fame boxing career.

Nevertheless, the ruling in the end was the right call and one which has been well-received and—as far as Golden Boy Promotions is concerned—worth the wait.

“The WBC made the right choice by reinstating Franchon Crews-Dezurn as its world champion,” said Eric Gomez, president of Golden Boy Promotions. “We are thrilled for her. She is a very exciting fighter and a stellar representative of the best that Golden Boy offers.

“We can’t wait to see ‘The Heavy-Hitting Diva’ back in the ring.”

The ruling also saw Jimenez receive a nine-month suspension from the date of the positive drug test.

While the WBC was slow in its process, Crews-Dezurn (6-1, 2KOs; 1ND) was overwhelmed by a groundswell of support from the boxing community.

“First, I’d like to thank the fans for rooting for Franchon to get her belt back that she deserves,” said Bernard Hopkins, the Hall of Fame-elected former two division champion and stakeholder in Golden Boy Promotions. “I would also like to commend Oscar De La Hoya, Golden Boy and myself for fighting behind the scenes to get justice for Franchon.

“Now let’s move forward and get the best fights she deserves!”

Crews-Dezurn has not fought since the tainted bout with Jimenez. She became a unified champ following a 10-round decision over Maricela Cornejo last September. Interestingly, Cornejo was a late replacement for Jimenez, who reportedly was unable to secure a travel visa in time for their clash in Carson, California.

The rescheduling of their bout was also contingent upon both parties submitted to full random drug testing as contracted through Voluntary Anti-Doping Agency (VADA). Crews-Dezurn—a longtime staunch supporter of stricter testing—pushed for that stipulation, and provided clean samples for all tests throughout the promotion.