ATLANTA – Gervonta Davis arrived late and overweight Friday for what’s been billed as his lightweight debut.

Then the undefeated Davis shoved Yuriorkis Gamboa with two hands and ignited a brawl on the stage at Compound, a nightclub near State Farm Arena, the venue where Davis and Gamboa are scheduled to fight Saturday night.

Ordered was restored after several minutes by Atlanta police and security personnel. Neither fighter appeared injured.

Davis officially weighed in at 136¼ pounds for their 135-pound title fight. The Georgia Athletic & Entertainment Commission gave Davis one hour to return to the scale at the lightweight limit.

If Davis doesn’t come back to the scale at 135 pounds or lower, the vacant WBA world lightweight title only will be at stake for Gamboa. The Cuban-born Gamboa met his contractual obligation by weighing in at 134½ pounds. 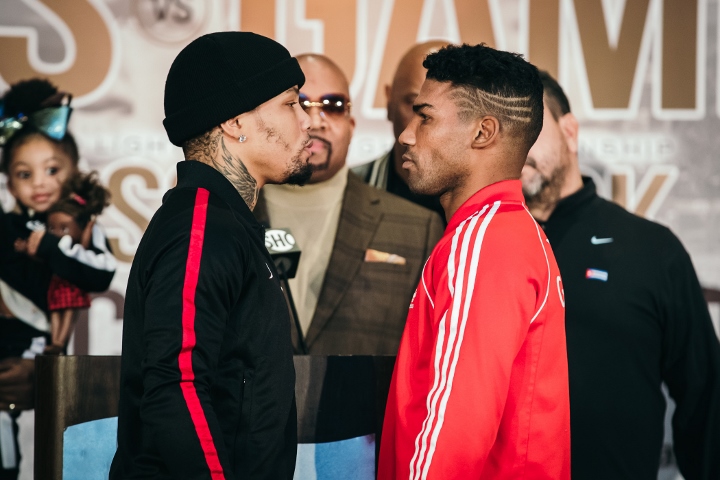 Odds-makers have installed Davis as a 20-1 favorite entering a fight Showtime will televise as the main event of a three-bout broadcast scheduled to begin at 9 p.m. ET/6 p.m. PT.

The four other fighters set to box in bouts Showtime will air made weight earlier Friday afternoon.

Jean Pascal came in at 174½ pounds for his light heavyweight title defense versus Badou Jack, who also weighed 174½ pounds.

The 37-year-old Pascal (34-6-1, 20 KOs, 1 NC), of Laval, Quebec, will make the first defense of the WBA world 175-pound championship he won by technical decision from Marcus Browne in his last fight, August 3 at Barclays Center in Brooklyn. The 36-year-old Jack (22-2-3, 13 KOs), a native Swede who resides in Las Vegas, will fight for the first time since Browne beat him by unanimous decision in a 12-rounder January 19 at MGM Grand Garden Arena in Las Vegas.

Before Pascal and Jack came to the scale, Jose Uzcategui and Lionell Thompson made weight for their 10-round super middleweight match, the opener of Showtime’s tripleheader.

Thompson came down from the light heavyweight division to face Uzcategui.

Tank is pathetic, going up a weight division and still failing to make weight. BTW How did he lose 1.5 lbs in 90 minutes? That is no small amount of weight for a small man.

No wonder!!!! I get the discipline thing, but fighters are too inactive. Not questioning courage.