SAN ANTONIO – Gervonta Davis, Leo Santa Cruz and their teams are satisfied with the panel of judges and referee who’ve been approved to work their title fight Saturday night.

The Texas Combative Sports Program has assigned Connecticut’s Glenn Feldman, California’s Alejandro Rochin and Oklahoma’s David Sutherland to judge their 12-round, 130-pound championship match at Alamodome. Texas’ Rafael Ramos has been appointed as the referee for their Showtime Pay-Per-View main event.

“I expect it to be a highly competitive fight,” Leonard Ellerbe, CEO of Mayweather Promotions, told BoxingScene.com following their press conference Thursday. “And Tank has gotta get started early because, again, we never want to leave it in a situation where – we’ve got great judges and all of that – but we don’t want to be in a situation where we’re relying on that. Because we’ve been in situations where we’ve seen a guy who’s the best fighter in the world dominate a guy for 12 rounds, and one of the judges had it a draw.

“And we’ve been in a fight where we’ve moved up in weight, when he was on the B side and he fights the A-side fighter, and clearly wins that fight, and they have the other guy winning the fight. What do they have in common? And that’s how I’ll close.” 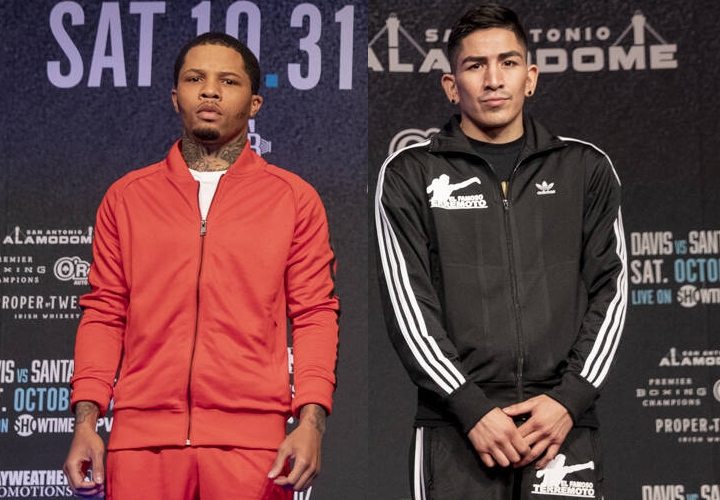 Santa Cruz’s lone loss was a 12-round, majority-decision defeat to Carl Frampton in July 2016 at Barclays Center in Brooklyn. He avenged that setback in their immediate rematch, which Santa Cruz won by majority decision in January 2017 at MGM Grand Garden Arena.

As for the Davis-Santa Cruz judges, Feldman most recently scored the Sergey Lipinets-Custio Clayton fight a draw, 114-114, on Saturday night at Mohegan Sun Arena in Uncasville, Connecticut. Lipinets and Clayton settled for a majority draw in their 12-round fight for the vacant IBF interim welterweight title.

In Rochin’s most recent high-profile fight, he scored Deontay Wilder a 115-111 winner against Tyson Fury. Their WBC heavyweight title fight resulted in a 12-round split draw in December 2018 at Staples Center in Los Angeles.

In Sutherland’s most recent significant fight, he scored Jermall Charlo a 118-110 winner over Sergiy Derevyanchenko on September 26 at Mohegan Sun Arena. Judges Tim Cheatham (116-112) and Steve Weisfeld (117-111) scored Charlo the winner of their WBC middleweight title bout by slimmer margins.

Somewhere boxing promoters everywhere are thinking how much do we cash app Julia Lederman for a favorable scoring card. But we decline the BJ, she sucks at that more than scoring.

[QUOTE=Bronx23;20846716]I don’t think many consider this to be a big fight[/QUOTE] I am one those who doesn't think this is a big fight being that I believe this a gross mismatch. Davis is gonna destroy LSC and it won't even…

[QUOTE=buddyr;20846343]Especially with Laurence cole as a ref. He’s easily the most corrupt official in the history of the sport next to Richard Steele.[/QUOTE] I'll just say that if you're a hometown guy or Mexican, Cole is the ref and Van…

[QUOTE=Griever0730;20846295]I'm going with what Malignaggi said after the Diaz fight. Never really liked big fights being held in Texas.[/QUOTE] I don’t think many consider this to be a big fight

If Ramos breaks them whenever Gervonta gets close a la Bayless in the Mayweather/Maidana rematch, Leo has a good shot. This would assume that Ramos shows favoritism to Leo because he is of hispanic heritage.