Gervonta Davis will headline his first-ever pay per view Oct. 24 when he takes on Leo Santa Cruz on Showtime.

Davis (23-0, 22 KOs) is already mapping out his future, and if he gets what he wants, he should be in for a series of appetizing fights for the next couple of years.

If he comes away victorious against Santa Cruz, Davis is demanding the likes of Ryan Garcia, Vasiliy Lomachenko and Devin Haney to square off against him.

“Ryan Garica is picking up a good crowd. He’s like an Oscar [De La Hoya] coming up, not as big as Oscar but he has a crowd. It’s good when you have somebody who has people behind him and you know where you’re trying to go, it’s good to bring that together,” Davis told the Last Stand Podcast with Brian Custer. “He’s a baby, but he’s got potential. He needs to work with Canelo’s team [and trainer Eddy Reynoso] a little more.” 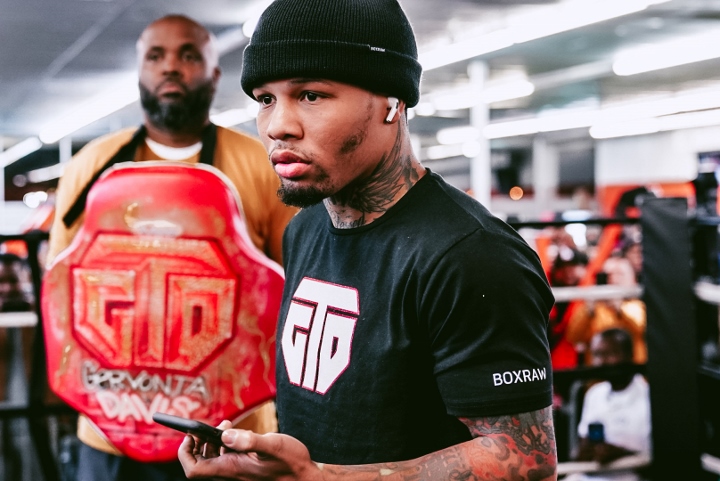 After Garcia, Davis would also welcome a challenge against Lomachenko. The Ukrainian pound-for-pound great is currently a unified champion at 135, but he’s long wanted to fight at his desired weight at 130.

Despite his challenges on the scale, Davis has deemed that the junior lightweight limit is best for him as well.

"If we get past our guys that we got ahead of us, then [Lomachenko and I] can make it rock,” said Davis. “I think it's probably time. Definitely not this year. If not next year, then 2022. I believe at the beginning of 2022 we can make it happen."

Davis said the fight has not been made to date due to situations out of his control.

“It’s definitely not me,” he said. “It’s just politics and coming to the right agreement.”

In recent weeks, Haney, who’s increasingly had a developing relationship with Davis promoter Floyd Mayweather Jr. of late, has been directing diatribes toward Davis calling out his work ethic.

“Do I look like I would duck a Devin Haney? He’s a clout baby. He’s looking for the clout,” said Davis.

[QUOTE=Bronx2245;20741651]Not like how he continually says he wants Ryan Garcia and Tank![/QUOTE] Shakur is another one. This guy has a huge potential if he stays clear. Being sold on him by the day. He'll end up at welter eventually. Davis…

[QUOTE=Curt Henning;20742528]what the haters dislike the most about tank is that hes headlining shows and selling tickets....hes selling 12k in tickets in multiple cities...hes about to headline a ppv at an age where, most of the p4p fighers, were still…

[QUOTE=Bronx2245;20741656]March 28, 2020: [B]Teofimo Lopez: Gervonta Davis Has No Discipline; It's Catching Up To Him[/B] “The only problem with Gervonta Davis is his discipline,” Lopez told BoxingScene.com. “He has no discipline. That’s what wins us fights. Obviously, it’s catching up…

what the haters dislike the most about tank is that hes headlining shows and selling tickets....hes selling 12k in tickets in multiple cities...hes about to headline a ppv at an age where, most of the p4p fighers, were still fighting…