Gervonta Davis: I Cut Off Gamboa Fight When I Tried To Watch It; That Wasn't Me

He tried to watch his fight against Yuriorkis Gamboa a few weeks after he stopped the Cuban challenger in the 12th round. Davis got through about a minute of the first round before he fast-forwarded to other parts of their lightweight title fight that he couldn’t stand to watch, either.

That’s how displeased Davis remains with how he performed December 28 at State Farm Arena in Atlanta.

“I cut it off,” Davis told BoxingScene.com. “I didn’t really like the performance. That wasn’t really me.” 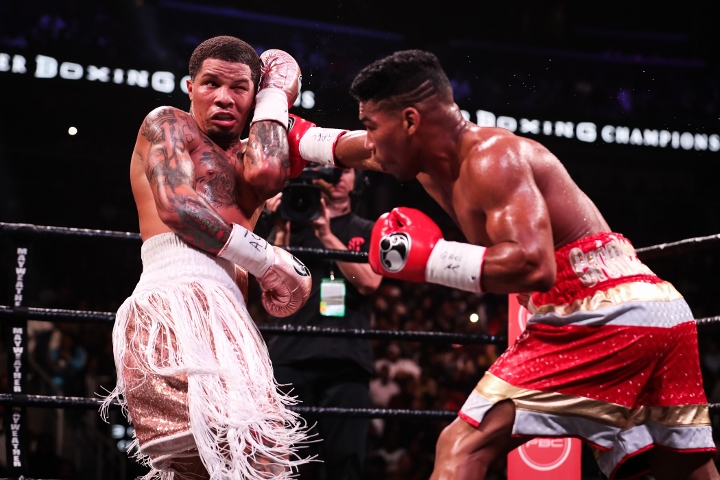 Baltimore’s Davis dropped Gamboa once apiece in the second, eighth and 12th rounds. Referee Jack Reiss stopped the action 1:17 into the final round, immediately after Davis’ left uppercut sent Gamboa to the seat of his trunks.

The 25-year-old Davis was way ahead on all three scorecards – 109-97, 109-98 and 109-98 – when Reiss determined Gamboa shouldn’t continue. Gamboa said afterward that he suffered a torn right Achilles tendon during the second round versus Davis.

Davis won the WBA world lightweight title, which was vacant, yet he doesn’t reflect fondly on much that occurred that night.

“Just the overall performance, I didn’t like it,” said Davis, who knocked out Gamboa later in their fight than any previous opponent. “It was little stuff that I’m not used to. That’s not me. You go look at my previous fights, and then go look at the Gamboa fight, that wasn’t me.”

The strong southpaw intends to atone for what he considers an unacceptable performance when he challenges Leo Santa Cruz on Saturday night for the WBA “super” 130-pound championship. Davis vacated the title he’ll try to win back to move up to the lightweight division last year.

“My performance against Gamboa, I wasn’t happy with that, so I’m definitely motivated for this fight,” Davis said. “The world’s gonna see come October 31st.”

Davis (23-0, 22 KOs) also will defend his WBA 135-pound crown against the 32-year-old Santa Cruz (37-1-1, 19 KOs), but they cannot weigh in for their Showtime Pay-Per-View main event above the junior lightweight limit of 130 pounds. The 12-round bout between Davis and Santa Cruz, a four-division champion from Rosemead, California, will headline a four-fight broadcast that costs $74.99 and is scheduled to begin at 9 p.m. ET/6 p.m. PT.

That's what he gets taking a fight vs a guy he had no respect for.

[QUOTE=-Kev-;20860327]GGG fans claimed he would last long because he “barely gets hit”. But come his first loss and that’s no longer the case. If the shoes fits.[/QUOTE] He has lasted pretty long. He's 38 and only lost once & drew…

[QUOTE=The D3vil;20859210]Yes, very convenient that athletes aren't in their prime in their mid 30s and after a lot of wear & tear, just like in every sport[/QUOTE] GGG fans claimed he would last long because he “barely gets hit”. But…

[QUOTE=-Kev-;20846552]Sure bud. That was the issue. Very convenient.[/QUOTE] Yes, very convenient that athletes aren't in their prime in their mid 30s and after a lot of wear & tear, just like in every sport

[QUOTE=-Kev-;20845521]Many fighters aren’t “themselves” as they step up in competition. GGG wasn’t GGG when he fought Jacobs, Canelo and Derevyanchenko, the three best opponents he has faced. But his fans would have you believe that his prime was when he…