The 24th fight of Floyd Mayweather Jr.’s career may have been his toughest.

On October 21, 2000, the 1996 U.S. Olympic bronze medalist, already a world champion at 130 pounds, engaged in a non-title bout against Emanuel Augustus on HBO’s KO Nation series. It was a pitched battle for as long as it lasted, the unorthodox journeyman giving the elite Mayweather all he could handle until he was halted in the ninth round.

When it was over, Augustus went back to the trenches of the regional circuit, popping up every now and then for televised wars with the likes of Micky Ward and Ray Oliveira.

Mayweather, already a star rapidly rising, fought his first SuperFight less than three months later against Diego Corrales. By 2005, he had picked up a world title at 135 pounds and was moving up to headline his first pay-per-view event against Arturo Gatti. He never looked back, becoming boxing’s biggest star.

On Saturday, the 24th fight of Gervonta Davis’ career may be his toughest. But if Leo Santa Cruz doesn’t force “Tank” to fight the fight of his life at the Alamodome in San Antonio, at least “El Terremoto” will be his most accomplished and high-profile opponent to date, hence their pairing winding up on pay-per-view.

It’s a roll of the dice, for sure, testing Davis’ marketability in the middle of the COVID-19 pandemic, but the Baltimore native and his team believe the timing is perfect to see if he will follow in his promoter’s footsteps. And having Mayweather as a key member of that team, not just from the business side but in the gym in Las Vegas, is quite the asset for the 25-year-old.

“Floyd’s been there coaching me through what comes with having my first pay-per-view main event fight,” said Davis. “There’s a lot of pressure on me and you have to live up to fighting on pay-per-view so you can fight on pay-per-view again. When I’m down or anything like that, he’s able to push me, because he’s been there before. There are things that only Floyd can tell me about because he has that experience.”

“I know ‘Tank’ is ready for pay-per-view because his fan base is really growing,” added Mayweather. “The demographic that follows him is getting bigger. With Leo being popular on the West Coast and in Texas, he’ll bring a huge following, as well. This fight can only be on pay-per-view, in my opinion.”

If anyone knows the pay-per-view business, it’s the 43-year-old Mayweather, whose bout with Gatti kicked off a string of 16 PPV appearances from 2005 to 2017, when he defeated UFC star Conor McGregor for his 50th pro win. That 2017 bout was estimated to have garnered 4.3 million buys, a number surpassed only by Mayweather’s 2015 win over Manny Pacquiao, which generated 4.6 million buys. It’s why the aptly monikered “Money” was the highest paid athlete of the last decade according to Forbes. 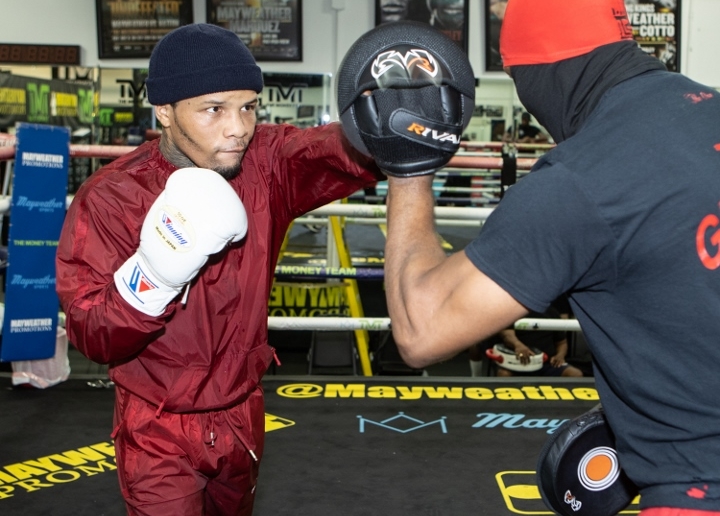 So what was the secret of Floyd’s success? He wasn’t a vicious knockout artist like Mike Tyson, he didn’t engage in all-action brawls like Evander Holyfield and he wasn’t the cool grandpa who could kick your ass like the second coming of George Foreman. He wasn’t even a heavyweight.

Some would say having dance partners with huge followings of their own like Pacquiao, McGregor, Oscar De La Hoya, Canelo Alvarez and Miguel Cotto was the reason. That’s part of it, but he hit or went over the million buy mark with the likes of Juan Manuel Marquez, Shane Mosley, Victor Ortiz and Robert Guerrero.

Was it talent? Mayweather was a sublime defensive fighter in the latter stages of his career with a Fight IQ off the charts. Not exactly the type of fight to invite five of your friends over to see on a Saturday night unless they’re boxing diehards.

But when you add talent, intriguing dance partners and frequent peeks at the “Money” lifestyle, one that hit the younger demographic, Mayweather’s pay-per-view appeal is clear.

Where does that leave Davis?

At 25, he’s three years younger than Mayweather was when he made his PPV debut, so he’s got that working for him even though he doesn’t have his promoter’s Olympic pedigree and hasn’t faced close to the same level of opposition. That may be a product of today’s boxing world more than anything, but remember that Mayweather under the Top Rank banner and with an Olympic medal in his trophy case was moved faster than most and he wasn’t backing down from anyone.

In the time from his title-winning effort against Genaro Hernandez to his fight with Augustus, Mayweather’s six opponents sported a combined record of 214-15-5. Davis was 16-0 when he won his first title, halting Jose Pedraza in seven rounds in January 2017. From Pedraza to the present, there have been seven opponents. Their combined record? 180-10-1. Not bad at all. And while Ricardo Nunez and Hugo Ruiz don’t get the same recognition as an Angel Manfredy or Gregorio Vargas, maybe in future years they will. If not, Davis did the best with what was in front of him, and with knockouts in all seven of those fights, that’s another notch in his belt.

Plus, Davis has been a ticket seller wherever he’s gone, drawing over 14,000 people to his most recent fight against Yuriorkis Gamboa last December. That should have been the biggest notch in his belt to date, but he wasn’t at his best against the Cuban, and in January, a domestic violence incident with the mother of his daughter was Davis’ latest brush with the law. Add in his past feuding with Mayweather and issues with the scale, and “Tank” could be sabotaging his career before it gets to where it could go.

Yet as the Santa Cruz fight approaches, Davis and his longtime trainer Calvin Ford are in Vegas, away from the distractions at home, and apparently all is well with everyone involved on the Davis side of the ring.

“I’m having my camp here so I can stay focused on just boxing,” said Davis. “I’m close to my Mayweather team and I have Floyd in the gym with me more. I’m grateful for having Floyd here to help me tweak things that will help me fight better against Leo.”

“Tank has just really kept this camp serious,” adds Ford. “Just watching him, I’ve seen him grow. Gervonta ‘Tank’ Davis: the family man, the fighter and then the businessman. So he’s learning. No one gave him a manual to do this. He’s putting it together on his own.”

It hasn’t been easy, and when you walk that boxing tightrope without a net, sometimes the crashes aren’t pretty. Mayweather knows it. He’s lived through it himself, and at times, he seemed to embrace being the villain in the eyes of the public. Maybe that even garnered some more PPV buys because people wanted to see him get beat. Will Davis follow that part of the blueprint, or will Gervonta Davis, family man, ultimately be the narrative outside the ring?

The kid can fight, there’s no question about that. And in addition to Santa Cruz, there are plenty of future opponents at 135 pounds that would garner significant fan interest, from Teofimo Lopez and Vasiliy Lomachenko to Devin Haney and Ryan Garcia, making his future a bright one if he stays focused and out of trouble.

Can he do it? Davis believes he can. So does the PPV king.

“I definitely feel that I’m maturing with each one of my fights and as I keep moving forward. All I have to do is stay focused, stay humble and the rest is history,” said Davis.

“I believe in Tank,” said Mayweather. “I’ve believed in him ever since he was a young kid. He’s still a kid in my eyes, but he’s a young man now. I told him it was going to come fast and when it comes, to be ready.

“You haven’t seen the best Gervonta Davis yet.”