The beauty of Gennady Golovkin’s accomplishments thus far is in the eye of the beholder.

I think we can all agree that Triple-G has been and remains an exceptionally good fighter, certainly one of the best of his era. He will be a first-ballot Hall of Famer. But does he truly have the resume of a great fighter? Maybe yes, maybe no, maybe somewhere in between.

The obvious argument for Golovkin is his consistency over a long period. His handlers proudly point out that a victory over Canelo Alvarez on September 15 would his 21st successful title defense, which would break Bernard Hopkins’ venerable record for consecutive defenses.

And it’s not just the victories; it’s the way he claimed them. He had 23 consecutive knockouts – 14 inside five rounds – before Daniel Jacobs took him the 12-round limit in March of last year, meaning Triple-G destroyed everyone within his reach.

And while I personally don’t believe sanctioning-body titles carry much weight, anyone who can collect three of the four major belts in any division these days – as Golovkin did – has accomplished something worthy of praise.

All of the above is why Golovkin could retire this minute and still be inducted into the International Boxing Hall of Fame in Canastota, New York, five years hence.

That’s the good. Now the not-as-good.

Let’s start with the title-defense record, which could be perceived as misleading. He made five of the 20 defenses when he held the bogus WBA “regular” title and no other. Felix Sturm held the sanctioning body’s “super champion” during that period, meaning he was its legitimate standard bearer.

That means one could argue that Golovkin has made 15 successful defenses, not 20. That’s still a remarkable feat, just not record breaking.

Let’s look at his opponents in those defenses. I don’t see a single middleweight pre-Jacobs who was anywhere near the pound-for-pound Top 10, the only exception being vastly undersized Kell Brook in September 2016. Golovkin has fought a number of good fighters but none before Jacobs were special in any meaningful way. 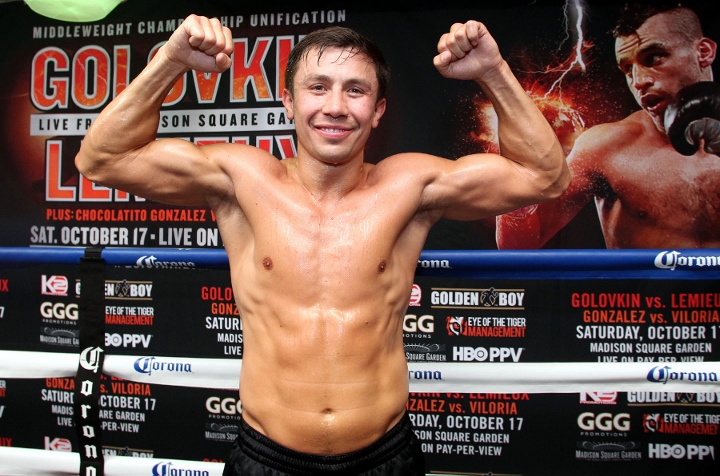 And when Golovkin finally did face an opponent who was considered elite – Jacobs – he struggled, escaping with a close unanimous decision.

Now I must defend Golovkin here.

One, the division has never been deep during Golovkin’s reign. That’s not his fault.

Two, the titleholders earlier in his career wanted nothing to do with him and his punching power. That includes Sturm, Sergio Martinez and Miguel Cotto, the latter two of whom could’ve produced defining fights for him. Again, not his fault.

And, three, he deserves credit for overcoming Jacobs even if it wasn’t his best performance. The talented New Yorker reportedly entered the ring at around 180 pounds, which technically made him a cruiserweight.

All that said, however, the fact remains that Golovkin still doesn’t have a defining victory at 36 years old. Can you name another great fighter without at least one special performance against an elite opponent? Most have more than one.

The good news for Golovkin is that a potential one is directly in front of him – Alvarez on September 15 – and there might be a few more before he decides to hang up his gloves.

Of course, most people believe the judges cheated Golovkin out of the biggest victory of his career when they scored the first Alvarez fight as a draw, which left him bitter and angry. Consensus was that Triple-G did more than enough to win.

The fact Alvarez spoiled their original May 5 rematch by testing positive for clenbuterol, which cost Golovkin a huge payday and his IBF belt when he chose to fight Vanes Martirosyan instead of mandatory challenger Sergiy Derevyanchenko on that date, only added to Golovkin’s ire.

It’s not difficult to imagine Golovkin taking his rage out on Alvarez in the ring and emerging with that elusive victory for which he will be remembered.

The middleweight waters remain relatively shallow but there are some compelling potential opponents if he beats Alvarez. Jacobs fights Derevyanchenko for the vacant IBF title on October 27, meaning Golovkin could reclaim that belt if he fights the winner. Jermall Charlo, one of the hottest fighters in the world, is his mandatory WBC challenger. And he could add the WBO belt to his collection by defeating unbeaten titleholder Billy Joe Saunders.

Yes, even at this late stage, Triple-G still has the time and potential foes to build the legacy he seemed destined to have.