The undefeated middleweight champion still can see himself fighting until he is Mayweather’s age. Golovkin is 35, but if he beats Canelo Alvarez next month the Kazakh knockout artist probably would need to fight only another year or year-and-a-half if wants to break Bernard Hopkins’ record of 20 straight middleweight title defenses before he retires.

Golovkin has made 18 consecutive defenses of the WBA 160-pound championship he won in August 2010. Nevertheless, Golovkin seemed open to the idea of fighting until he’s 40 when answering questions on a conference call Wednesday to promote his September 16 showdown with Alvarez (49-1-1, 34 KOs) at T-Mobile Arena in Las Vegas (HBO Pay-Per-View; $74.95 in HD). 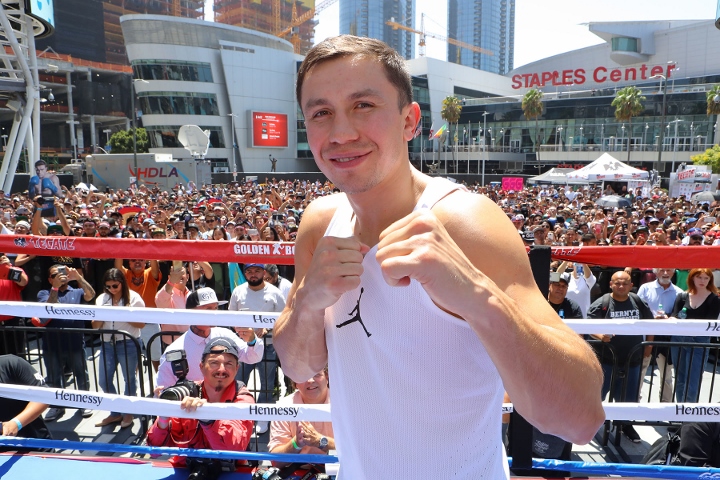 “I think if we’re able to secure the kind of fights that motivate him mentally – physically, he’s always in shape,” Sanchez said. “All great fighters like that are always in shape. But the mental part of it is so important because you have to be motivated for a fight. If [promoter] Tom [Loeffler] and the Hermann brothers [Golovkin’s managers] and the powers that be can get him the kind of fights that motivate him and reward him to come back in the gym and work just as hard he does for all fights, then yes, I can see him fighting that long. But I think if there’s an if, that’s the big if.”

That decision ultimately will belong to Golovkin.

“If he’s motivated to fight on for another three or four years, then he should,” Sanchez said. “If he doesn’t have it in him, then he shouldn’t. But I think if we do better on the 16th, I think the public will ask for him to fight on. And as long as he keeps fighting the way that I know he can, the public will keep asking for that. Hopefully, Tom can put those together.”

[QUOTE=Vegemil;18008101]It's not like Golovkin was a spring chicken who just magically jumped into the pro game. He was in the amateurs for a long ass time.[/QUOTE] Kinda speaks to that tenative nature of his doesn't it? Let me protect myself…

[QUOTE=robbyheartbaby;18008839]are you familiar with Golovkins extensive amateur background? GGG has been around a long long time.[/QUOTE] Good point but thats with head gear. He developed his skills with protection. Unlike Canelo who learned the hard way and took bodily harm…

[QUOTE=Boxing lives;18008071]Way less rounds boxed professionally than Canelo. Canelo's been in with the tougher competition. More miles on Canelo. He still takes out the young prime undefeated champion because he's just that damn good.[/QUOTE] are you familiar with Golovkins extensive…

[QUOTE=Liondw;18005884]Boxing is very much alive but what is left in the sport on the horizon though besides this fight? Thurman vs Spence vs Crawford. Joshua vs Wilder, Lomachenko vs Garcia/ Rigondeaux. Canelo vs GGG vs Charlo. I don't see much…

[QUOTE=Boxing lives;18008071]Way less rounds boxed professionally than Canelo. Canelo's been in with the tougher competition. More miles on Canelo. He still takes out the young prime undefeated champion because he's just that damn good.[/QUOTE] It's not like Golovkin was a…