ALLENTOWN, Pennsylvania – Gary Russell Jr. was too elusive, too experienced, too fast, too skillful and too smart for Tugstsogt Nyambayar.

The WBC featherweight champion out-classed his mandatory challenger Saturday night and convincingly beat him in their 12-round title fight. Russell retained his 126-pound championship by winning a unanimous decision in the main event of Showtime’s three-bout broadcast from PPL Center.

CompuBox’s unofficial statistics indicated that the fight was closer than the judges saw it. According to CompuBox, Russell landed only 12 more total punches than Nyambayar (134-of-867 to 122-of-707).

The 31-year-old Russell, who has lost only a majority decision to three-division champion Vasiliy Lomachenko, improved to 31-1 (18 KOs). The 27-year-old Nyambayar, a 2012 Olympic silver medalist for Mongolia, lost for the first time as a professional (11-1, 9 KOs).

“We put the work in every day in the gym,” Russell said. “I’m a perfectionist. We knew we had a very tough opponent and I knew he was gonna bring his physical best. He had everything to gain and nothing to lose. We just focused and showed I’m one of the longest-reigning champions for a reason.

“The difference was ring generalship, hand speed and boxing IQ. He only had 11 pro fights. Of course, he was an Olympic silver medalist, but he only had those 11 pro fights. I’ve had over 30 and I think my experience was enough to overcome and win this fight.”

Russell, of Capitol Heights, Maryland, made the fifth defense of the title he won nearly five years ago by knocking out Mexico’s Jhonny Gonzalez. He said before beating Nyambayar that he’ll move up from featherweight to lightweight if he can’t land the title unification fight against WBA “super” featherweight champ Leo Santa Cruz that has long eluded him. 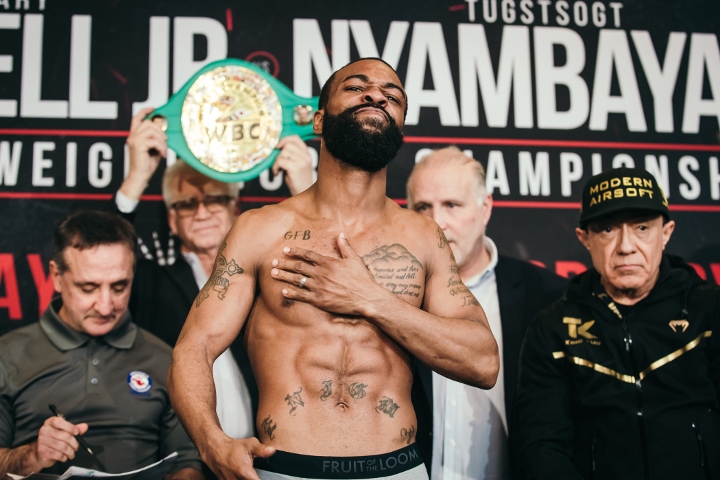 Nyambayar became the mandatory challenger for Russell’s title by defeating Dominican contender Claudio Marrero by unanimous decision in their 12-round WBC elimination match in January 2019. Before facing Russell, he hadn’t fought since overcoming Marrero more than a year ago.

Russell, often criticized for more fighting more frequently, actually ended a shorter layoff Saturday night than Nyambayar. The 2008 U.S. Olympian’s most recent bout before Saturday came May 18, when he stopped Spain’s Kiko Martinez in the fifth round at Barclays Center in Brooklyn.

Nyambayar didn’t blame his performance on ring rust, but he wasn’t pleased with how he fought.

“It wasn’t my night,” Nyambayar said. “He was the better man tonight. I didn’t do my work the way I was supposed to. He is a great champion who fought a great fight. I made a mistake by waiting for him during the fight. I’d love the rematch if I can get it.”

Nyambayar tried at times during the 12th round to land the type of shot he desperately needed to alter what had become an obvious outcome. Russell was just too effective defensively to get caught with any of Nyambayar’s thudding shots.

Nyambayar gained some momentum in the 11th round, when Russell moved less and traded with him more. Even when Nyambayar landed a hard shot, though, Russell took those shots well.

Nyambayar landed more right hands in the 10th round than he had connected on in any of the first nine rounds. Russell slowed down somewhat in that round, but he did drill Nyambayar with a straight left hand late in the 10th.

A straight left hand by Russell landed square in the middle of Nyambayar’s face 45 seconds into the ninth round. Nyambayar landed a hard right hand to Russell’s body in the middle minute of the ninth.

Russell and Nyambayar traded hard shots in a fast-paced exchange that occurred with just over a minute to go in the seventh round.

Nyambayar backed Russell into Nyambayar’s corner about 1:10 into the sixth round. Nyambayar fired right hands at Russell, but Russell fought out of the corner by landing a left hand and pivoting.

Nyambayar nailed Russell with a right hand just before the midway mark of the fifth round. Russell went to the canvas for the second time in the bout approximately 20 seconds later, but he fell only after Nyambayar put his forearm on the back of Russell’s neck.

Nyambayar had trouble landing clean shots on Russell in the third round. A straight left by Russell landed with just over a minute to go in that round.

Nyambayar’s straight right hand connected about 1:10 into the second round. Russell eluded Nyambayar’s right hand for the remainder of that round, though, and landed a couple left hands of his own.

Russell landed a straight left hand about a minute into the fight. Russell went to the canvas with about 40 seconds to go in the first round, but Rosato rightly ruled that he went down because their legs got tangled.

see you in a year's time Gary

Russell has speed and is slick but boring, lands basically jabs to score points, doesn´t engage and holds. No wonder no one wants to fight him, he can´t sell an arena and only fights once a year. Black-Americans are always…

Please let him move to 135 and get beaten so we can put an end to him holding a belt hostage. If a fighter doesn't fight every 6 months they should lose their belts.