The undefeated junior lightweight didn’t even need a full round to add to that total in front of his hometown fans. The Allentown native knocked down overmatched Mexican Pablo Cupul twice before Ricky Gonzalez jumped in to spare Cupul any more punishment.

Gonzalez stopped their scheduled four-rounder 2:39 into the first round on the Gary Russell Jr.-Tugstsogt Nyambayar undercard at PPL Center.

The 22-year-old Jules (9-0, 2 KOs) first floored Cupul with a straight left hand. Cupul got up and continued, but Jules eventually overwhelmed him with a barrage of power punches that left Cupul crumpled on the canvas in a neutral corner.

The 32-year-old Cupul (10-31, 5 KOs) has been knocked out in four straight bouts and has lost five consecutive fights overall.

About two minutes later, Marrufo was flat on his back, apparently unaware of what hit him. The unbeaten Russell, one of WBC featherweight champion Gary Russell Jr.’s younger brothers, nailed Marrufo with a counter right hook that ended their fight just 2:12 into it.

Marrufo tried to get up, but referee Ricky Gonzalez quickly determined that Marrufo was in no condition to continue.

Russell, a 23-year-old southpaw, has now knocked out each of his 13 pro opponents. Gary Russell Jr. worked his younger brother’s corner on the same night he’ll make a mandatory defense of his title against Mongolia’s Tugstsogt Nyambayar in a main event Showtime will televise.

The 27-year-old Russell (17-0, 12 KOs) was ahead 50-45 on all three scorecards when Gonzalez disqualified Colombia’s Martinez (27-11, 13 KOs) for repeatedly hitting Russell low and holding in the fifth and sixth rounds. Their eight-rounder was stopped at 1:31 of the sixth round. 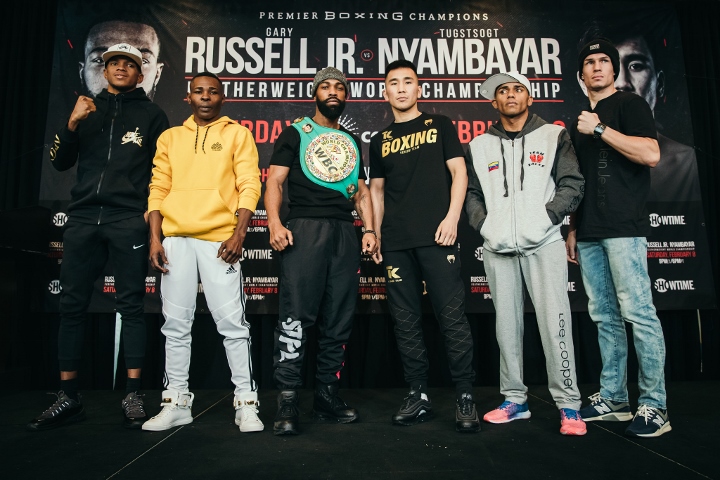