Gary Russell: Maybe Jump Up To Lightweight Will Get Me Fights I Want

Tired of waiting for the type high-profile fights that he hasn’t been able to secure within the 126-pound division, Russell is prepared to move up to the lightweight division even if he defeats the unbeaten Nyambayar in a main event Showtime will televise from PPL Center. The WBC featherweight champ plans to skip the 130-pound division altogether because he sees better opportunities at 135 pounds.

Russell mentioned lightweight champions Gervonta Davis, Devin Haney, Vasiliy Lomachenko and Teofimo Lopez as potential opponents. The only featherweight Russell says could keep him at 126 pounds is Leo Santa Cruz, but Santa Cruz is more likely to face Davis in his next bout.

“We never overlook or underestimate anyone, never in a million years,” Russell said following a press conference Thursday at the Renaissance Allentown. “That’s why I prepare myself to the best of my ability. But God willing, we get through this guy [Nyambayar] and if I don’t have a signed contract stating that Leo Santa Cruz would take a fight, then I definitely plan on vacating my title and moving up, jumping up two weight classes, going directly to 135 and challenging these bigger guys because I’m not getting the fights in my weight division. Maybe they need to feel as though they have somewhat of an [advantage]. Maybe they need to fight a smaller guy. Maybe at that point we’ll get some of the fights that we want.”

Only one boxer in the sport, WBC heavyweight champion Deontay Wilder, has held a world title in the same division longer than Russell. The 2008 U.S. Olympian’s long reign as a featherweight champion has been beleaguered, however, by inactivity and a lack of top opposition.

His 12-round fight against Nyambayar will mark just the fifth title defense for Russell since the highly skilled, strong southpaw stopped Mexico’s Jhonny Gonzalez in the fourth round to win it in March 2015. Three of Russell’s five championship defenses have come against decided underdogs Patrick Hyland, Oscar Escandon and Kiko Martinez, each of whom Russell knocked out.

Russell (30-1, 18 KOs) made his most meaningful title defense in May 2018, when the Washington, D.C., native out-pointed previously unbeaten Joseph Diaz Jr. in their 12-rounder. Mongolia’s Nyambayar also is a credible challenger, despite his lack of professional experience (11-0, 9 KOs).

Nevertheless, Russell’s critics contend that he hasn’t maximized his potential because he has boxed just once apiece in each of the past five calendar years. The 31-year-old Russell insists that he shares their frustration regarding his inactivity.

“I definitely welcome fighting more often,” Russell said. “If it was up to me, I would be competing more often. The reason why I’m only competing once a year is because I’m continually forced to compete against mandatory challengers. None of the champions are willing to get in the ring with me. The only reason I haven’t been competing [more frequently] is because none of these other guys have been willing to step in the ring against me, none of the other champions.

“It’s frustrating, but it’s flattering as well, you know, because one of the reasons why these guys don’t wanna get in the ring is because of the skill set that I bring, the tenacity, you know, and my ring IQ, etcetera. So, you’ve gotta take the good with the bad, the bitter with the sweet. So, we’re focused, we’re ready.” 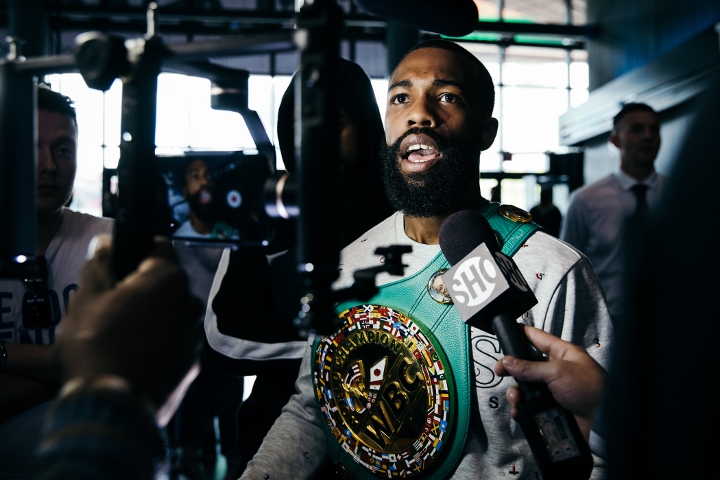 Russell’s readiness to move from featherweight to lightweight has nothing to do with struggles to make 126 pounds. The Capitol Heights, Maryland, resident has been a featherweight throughout his 11-year pro career and gladly would remain in that division if he could land high-profile fights in it.

“I’m completely comfortable at 126,” Russell said. “I can compete at 135 easily as well. My weight never really fluctuates that much. I walk around at maybe 135, something like that. It’s not really an issue, not a problem with me making weight. So, I’m good.”

Advancing to the junior lightweight limit of 130 pounds seems more reasonable, but there aren’t any fights in that division that intrigue Russell.

“There’s nobody at 130 that I wanna compete against,” Russell said. “The only reason why I would’ve stopped at 130 was specifically for Tevin Farmer because he was one of the only guys that mentioned my name, that said he wanted to compete against me. He said that if he got past Jo Jo [Diaz] that he wanted to fight me. I’m one of those guys that will answer the call. You know, I’m a true fighter. I’m a real warrior. I’m 126 pounds. If somebody walked in this room and they was 150 pounds, it doesn’t matter. If they say they wanna fight me, glove ‘em up.”

The aforementioned fights with lightweights are much more appealing to Russell.

Haney, Lopez and Lomachenko, the only pro to beat Russell, all are affiliated with promoters, streaming services and/or television networks that compete with Al Haymon’s Premier Boxing Champions. Russell stressed that typical boxing politics wouldn’t prevent him from fighting any of those lightweight champions.

“I’m one the few fighters that’s in a very unique situation because I’m a world champion,” Russell said. “I’m not signed to any promoter, manager or television network. I’m a complete free agent. Me and Al Haymon, we have a great business, working relationship. But I have the flexibility to move however I please. So, I don’t think any of those things will stand in the way of me getting any of these fights made.”

A fight versus Davis, who is advised by Haymon and promoted by Floyd Mayweather, would do big business in the Baltimore-Washington, D.C., area. If Davis defeats Santa Cruz, Russell would welcome that fight, too.

Regardless, Russell doesn’t feel the need to face a safer foe in his lightweight debut.

“I don’t want no tune-ups,” Russell said. “I don’t need no tune-ups. I don’t want none of that. Apparently, these dudes feel as though that they need some sort of extreme [advantage]. Me moving up in weight would give them the [advantage] that hopefully they’ll be willing to take a fight at that point.”

Here is a thought Mr. Russell. Maybe beating Lomo would have given you plenty of more fans by now.

I don't want to hear the excuse that he's only fighting once a year because of the other titlists. When you're being ducked and avoided, you fight WHOEVER will step in the ring with you and put pressure on the…

Smart move! There are NO CHAMPION in lightweight unless a Loma and Russel simply says that he will fight Loma ONLY AT THE END OF CAREER.

It should be Leo Santa Cruz vs Gary Russell Jr for the shot at Tank on PPV! While Tank is busy taking care of out the ring issues at the moment Of course that is IF Gary takes care of…