If he wasn’t good, would anyone bother with the jokes?

Gary Russell’s limited fight schedule since winning a featherweight belt in 2015 has earned a quip or two. Over the last five calendar years, Russell has appeared just once in all of them. In the last three years, the appearance came in May. Russell 2020 arrives ahead of schedule.  The 2008 US Olympian is talking about picking up his activity with an eye on bigger fights.

Before Russell gets there, he has a potentially dangerous mandatory on tap (Saturday, Showtime, 9 PM EST).

The danger comes, ironically, from another fighter who hasn’t made activity a priority. Tugstsogt Nyambayar, a 2012 Olympic Silver Medalist, has fought only twice since 2017 and had a ricky outing in getting to his first professional title match, winning a close decision over Claudio Marrero (though it was probably closer on the cards than in the ring).

As much as who will win, the question for this one might be can the victor capitalize? 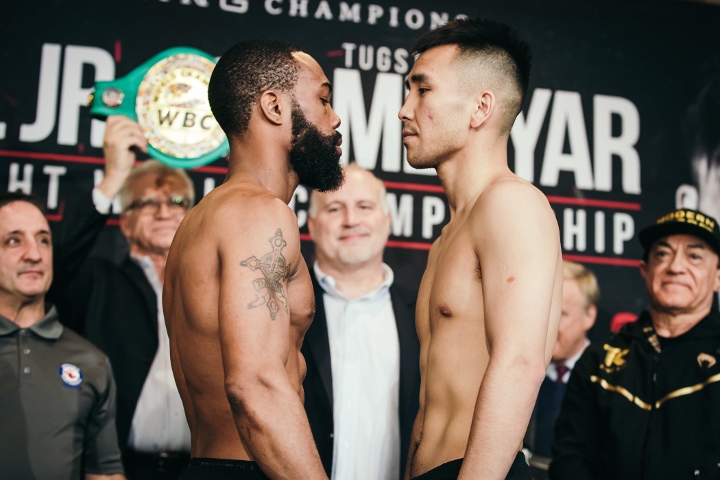 The Pick: This is a fight where we have a fairly proven commodity, and one of the fastest fighters in the game, Russell, against a challenger with just enough to point to as a professional to suggest his quality. Nyambayar isn’t as fast as Russell but he’s quick, has good timing, and shows off subtle defensive skills. The challenger will come forward and press the action, keeping close enough to punch with Russell. Look for Russell to get off early but the amatuer pedigree of Nyambayar means he’s seen speed. While both use lateral movement, they seem most comfortable looking for space to move forward. Nyambayar is longer and several inches taller and it could make a difference in his ability to counter Russell to finish exchanges. Both men have enough pop to stop anyone and neither has shown weakness in the chin department.

It looks, on paper, like one of the best Showtime main events in some time.

It also looks like a place for a potential upset. Nyambayar’s jab, hard combinations, and range will matter more and more as the fight moves along. Russell can be open to the body and Nyambayar lands downstairs with authority when he sets his aim there. It should create enough openings to the head to allow the heavy handed challenger to catch the eye of the judges in enough rounds to win a compelling decision.