They didn’t realize just how rough those rounds would become for the unbeaten, 20-year-old lightweight prospect. Garcia gave Adorno by far the toughest fight of his three-year pro career and fought the favored fighter to an eight-round split draw on the Jesse Hart-Joe Smith Jr. undercard at Hard Rock Hotel & Casino’s Etess Arena.

Judge Anthony Lundy scored their fight 77-75 for Adorno, but judge Lindsey Page scored it 77-75 for Garcia. Judge Lawrence Layton had it even (76-76). 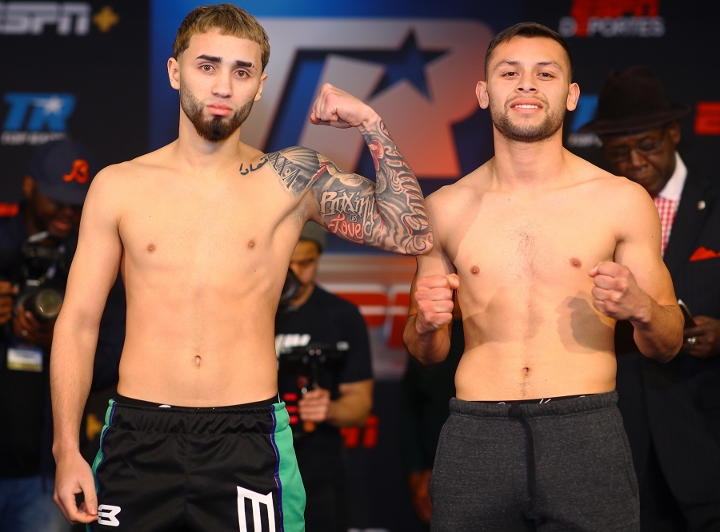 Adorno (14-0-1, 12 KOs), of Allentown, Pennsylvania, went the distance for just the third time in 15 professional fights. Garcia (14-7-4, 8 KOs, 1 NC) hasn’t been knocked out, though, and the tough Mexican veteran showed Adorno exactly why throughout a back-and-forth fight in which he mostly was the aggressor.

The younger, faster Adorno landed countless flush punches against Garcia in the early rounds of their bout, but he seemed to wear down during the second half of it. Adorno also couldn’t hurt the 25-year-old Garcia, who came on in the later rounds.

Garcia nailed Adorno with a right uppercut that got his attention early in the seventh round. That shot backed Adorno into the ropes and enabled Garcia to land several more power punches on Adorno, who was bleeding from his mouth.

Adorno gave Garcia much more competition in an action-packed eighth round.

Layton and Page scored that eighth round for Garcia. Lundy scored it for Adorno.

[QUOTE=ramplamp;20318790]I love when a Top Rank cherry pick goes wrong. Love it[/QUOTE] This is a guy on the come-up. This was a test/experience, not a cherrypick. Lol.

I love when a Top Rank cherry pick goes wrong. Love it