Gamboa: If No Surgery, I Want To Resume Training in 1 Month

Former two division champion Yuriorkis Gamboa would like to return to training as soon as possible.

Gamboa was in action this past Saturday night in Atlanta, when he was dropped three times and stopped in the twelfth round by Gervonta Davis. The vacant WBA "regular" lightweight title was at stake in the contest.

Gamboa appeared to have issues with his shoe during the contest. After the fight was over, he revealed that he suffered some form of an Achilles injury. He says the injury occurred in the second round. 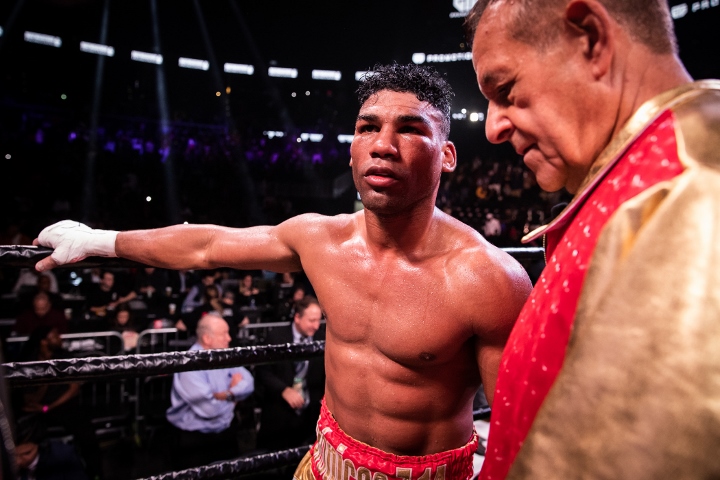 Gamboa is hoping that his injury will not require any surgery, as he wants to return to the gym in a month.

"Early in the second round, I felt like I had been punched in the foot. If you look at the video you will see that I make a gesture backwards, because I thought I had hit something. It was something I really didn't expect," Gamboa told George Ebro.

"Basically, I can't support [the foot]. I have a hole in my foot, a sunken part that annoys me, but as a warrior I tried to last, I tried to keep it at a distance with the jab, but I had no strength to support my right leg and to be able to unload my power hand.

"In my history I have shown my warrior heart and I do not complain. I'm not complaining. We got to the 12 round. We didn't finish it, but I was an injured person from the second round. I didn't take the win, but to all the fans, all those who watched the fight, I wholeheartedly say that I hope they are satisfied with my performance.

"I my age, I don't have many years left, but if the doctor tells me that there's no need for surgery and rest, and everything can get better, in a month I can start training.''

The Pacquiao analogy should not be used as circumstances were different. Pacquiao's camp actually expressed to Mayweather's camp that there was a shoulder injury before the fight. They even requested to allow Pacquiao be given a cortisone injection before the…

If the Achilles is torn, just slightly, the Achilles would have to be torn completely via surgery in order to repair it. Such a repair would keep Gamboa out of action for at least a year. For Gamboa to suggest…

[QUOTE=Bigchip;20294955]I saw the foot. It looks bad. It’s exactly the way he described it. There’s a hole in it.[/QUOTE] Yep. Yet everyone insist he lied about the injury. He may have misdiagnosed since umm... He's not a doctor but his…

I saw the foot. It looks bad. It’s exactly the way he described it. There’s a hole in it.