Kid Galahad has backed Josh Warrington to go on and unify the featherweight division.

The Sheffield man was on the wrong end of a split decision against ‘The Leeds Warrior’ last Saturday, exclusively live on BT Sport.

Galahad was the mandatory challenger to Warrington’s IBF world title and was denied the victory after tallies of 113-115, 116-112 and 116-113 were handed in by the three ringside judges. 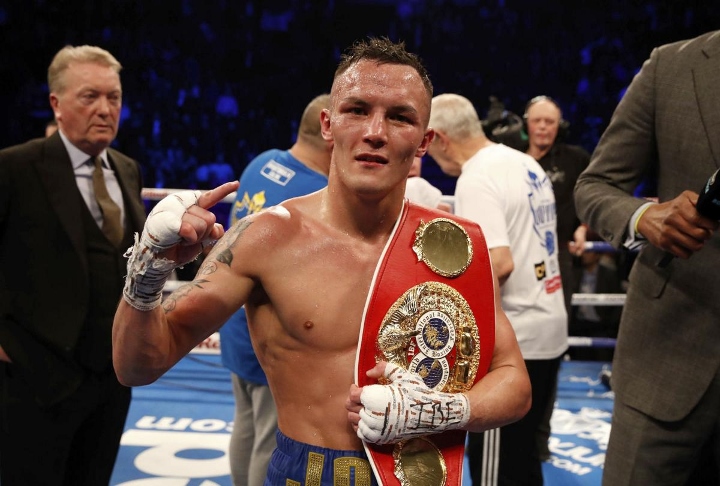 And after the defeat, the Ingle Gym-trained fighter backed Warrington — who is now planning an assault on the featherweight division from across the Atlantic — to go on and win more belts.

“Hopefully, he will get Oscar Valdez,” said Galahad, who is a former British, Commonwealth and European champion at super-bantamweight. “I’ve sparred Oscar Valdez and he will beat Oscar Valdez, 100 percent.”

Valdez, the WBO champion, is being touted as a potential opponent for former WBA Super world champion Carl Frampton before the year is out.

Frampton is expected to return on August 10 at the Liacouras Center in Philadelphia, Pennsylvania, against an opponent to be confirmed, before taking on Valdez for the world title in December.

And though Warrington would prefer a crack at current WBA Super world champion Leo Santa Cruz later this year, Galahad has said Warrington has more chance of fighting — let alone beating — Valdez than the 30-year-old Mexican.

He added: “Oscar Valdez is good, but I think he’s seen better days. He’s got a lot of wear and tear and Josh is young, hungry and fresh. If they fight, then I believe 100 percent that Josh will beat him.

“If he beats Valdez, then it’s about trying to get the other two belts.

“Will Santa Cruz want it? Josh has had better fights in his last three fights than Santa Cruz. I don’t think Santa Cruz will fight him.”

WBC champion Gary Russell Jr., Warrington’s manager Steve Wood told Boxing Scene recently, is likely to move up in weight, but he did say that if an opportunity came up to fight for that belt it would be something that they would consider.

Josh doesn't hit hard enough to get respect. The Kid was walking in with open arms and Josh had no answer.

Galahad boxed well against Warrington but he needs to incorporate more risk into his game. If he does that, he has what it takes to be a champion. Easy.

The only thing Warrington has shown to me until now is that Carl Frampton is finished.

:boxing:E[QUOTE=Frankie2Jabs;19849130]His ambitions are for his brother to spike his drinks again[/QUOTE] Yes, kid galahad don't sound too ambitious for himself now. No I was robbed comments and will beat josh in rematch