For the second time in five weeks, Gabriel Flores Jr. brought the crowd for an ESPN fight.

This time around, the 19-year old super featherweight failed to bring the pain, instead comfortably boxing his way to an eight-round decision over Mexico’s Salvador Briceño in rounds Saturday evening at Reno-Sparks Convention Center in Reno, Nev.

Scores were 78-74 twice and 79-73 in favor of Flores (14-0, 6KOs), who boxed at a steady pace throughout the contest which came in stark contrast to his explosive ESPN debut in May. 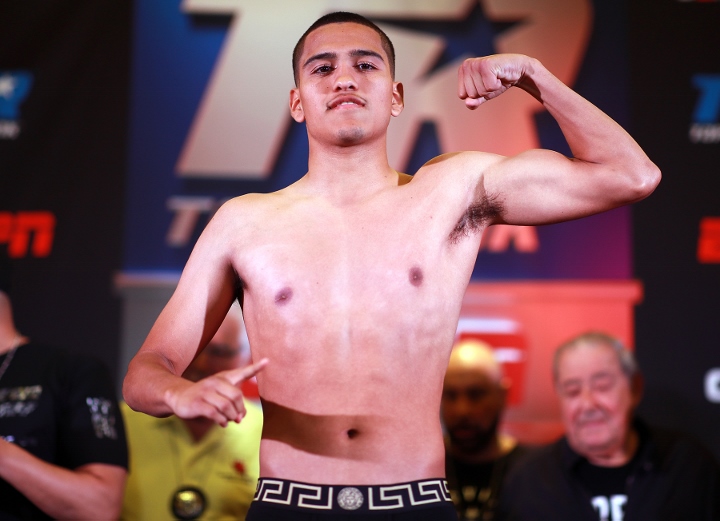 The venue holds a special place in the heart of Flores, who made his pro debut here just over two years ago. He’s since developed as a draw in California’s Central Valley region, as evidenced by putting more than 10,000 in attendance for his ESPN debut just last month as an undercard fighter in his Stockton (Calif.) hometown, where he scored a 3rd round knockout live in primetime.

More than 200 fans made the three-hour drive for Saturday’s bout, this coming in his first scheduled eight-round contest. It also came against the tallest fighter of his young career as both fighters stand 5’9”, considerably tall for the super featherweight division.

Neither scenario made any difference to Flores, who paced himself well in sticking to his game plan and not giving into the temptation of playing up to his adoring crowd. Briceño provided an inviting target for Flores’ jab and quick right hand, for which he had little response as his own counter right often caught nothing but air in fighting his first career bout in the United States.

“He was cautious,” Flores noted of his opponent, who was selected on short notice once the decision was made to put the unbeaten prospect on Saturday’s show. “I’m sure he saw my last fight and my left hook, he was cautious and made sure to not get hit.”

Flores—who is managed by Rick Mirigian, best known for guiding the career of unbeaten 140-pound titlist Jose Carlos Ramirez—didn’t show any concerns over not being able to close the show, sensing a durable foe in front of him and instead employed a stick-and-move game plan.

It was never to the point of running around the ring; in fact, Flores turned up the intensity in the later rounds, particularly after opening a cut over Briceño’s right eye midway through the contest.

Right hand shots landed flush for Flores in round seven, drawing a rise of the already vocal crowd. It caught Briceño’s attention, but ever to the threat of producing an early night. It didn’t matter, as Flores was going home with a ring regardless, although he did his best to make sure his fans were rewarded for the lengthy road trip.

Briceño was reduced to one slow-moving punch at a time by the 8th and final round, fighting with his mouth open and struggled to defend against Flores’ right hand and left hook shots. He managed to hear the final bell, but saw his modest two-fight win streak come to a close in the process as he falls to 15-4 (9KOs).

As for Flores, he’d simply like to see his own current activity level continue.

“Fight again,” Flores answered when asked by ESPN’s Bernardo Osuna what he’d like to do next. “Maybe within two, three months. I feel great, if Top Rank decides they want me to fight again (in the summertime), I’ll do it.”

The bout served as the chief support to Oscar Valdez in the sixth defense of his featherweight title versus fellow unbeaten Jason Sanchez.