Tyson Fury promised a much more impressive performance Saturday night than the last time he fought.

Fury predicted during a press conference Tuesday in Belfast, Northern Ireland, that he’ll box like “a heavyweight Sugar Ray Leonard” when he encounters Italy’s Francesco Pianeta. Fury and Pianeta will meet on the Carl Frampton-Luke Jackson undercard at Windsor Park, where a crowd of roughly 30,000 is expected for Saturday’s card. 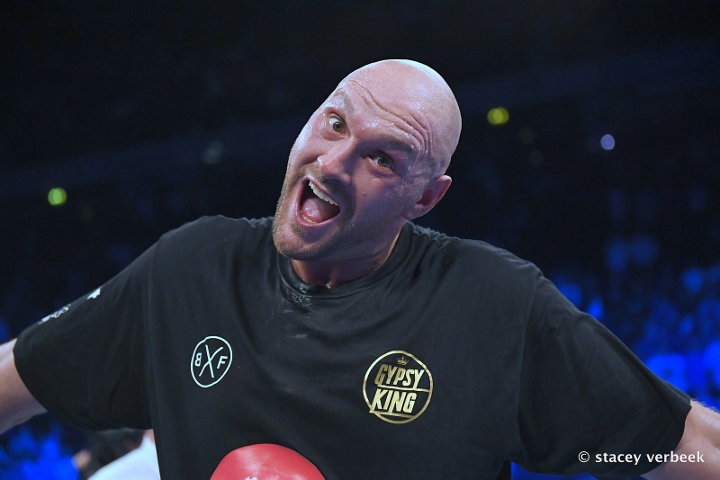 The 30-year-old Fury ended a 2½-year layoff June 9, but his technical knockout of Sefer Seferi amounted to a farcical fight because Seferi refused to engage. The 6-feet-9 Fury (26-0, 19 KOs) spent much of their bout clowning around, before Seferi refused to leave his corner for the start of the fifth round at Manchester Arena in Manchester, England.

The 33-year-old veteran is just 4-3 in his past seven fights, however. Those losses include a seventh-round technical knockout defeat to American Kevin Johnson on October 14 and a first-round knockout to Uzbekistan’s Ruslan Chagaev in a fight for the WBA title in July 2015.

If Fury tops Pianeta, the former IBF/IBO/WBA/WBO champion’s November showdown against WBC champ Deontay Wilder will be officially announced in the ring Saturday night. Frank Warren, Fury’s promoter, acknowledged during the press conference Tuesday that there’s a deal in place for Fury to challenge Wilder (40-0, 39 KOs) next if he wins Saturday night.

Wilder will be part of BT Sport’s broadcast team Saturday night for the Fury-Pianeta fight.

[QUOTE=uppercut510;19022350]I respect fury as a fighter, overcoming depression and personal demons to get back in the ring....and chasing a fight he really doesn't have to. im a boxing fan before everything. I want him to look good so we don't…

[QUOTE=Noelanthony;19021024]Hhhmm 🤔 such Nice words. Even words of encouragement. I’m sure he is American. Maybe there not so bad after all. Unless there is ulterior motive!![/QUOTE] I respect fury as a fighter, overcoming depression and personal demons to get back…

[QUOTE=hugh grant;19022024]Did I say something wrong? I said fury is no srl. And needs to only concentrate on getting rid of rust[/QUOTE] sparring , most talented should be some clues for you. When you mention sparring partners ? What kind…