Fury: WWE Picked Me Over Wilder Because I'm Entertaining

Tyson Fury took a break from boxing and forayed into wrestling and WWE late last year as he further built his profile in the United States, and abroad.

Fury (29-0-1, 20 KOs) next fights Deontay Wilder (42-0-1, 41 KOs) in a rematch Feb. 22 at the MGM Grand in Las Vegas on Fox and ESPN pay per view, and he believes that although Wilder is tied to Fox, the network preferred to highlight him instead for their partnership with WWE because he’s the better entertainer.

“Wrestling is for people with charisma and entertaining powers,” said Fury. “If WWE wanted him, if he was good enough to be a wrestler, they would’ve chosen him. But they chose me. And he’s even with Fox. But they didn’t want him because he sucks. He can’t talk. We already heard him. He’s boring. We wish he would just get to the point [when he speaks] so I can go and have a cup of tea. He’s not entertaining enough. He doesn’t have charisma to be a WWE superstar. That’s the truth.” 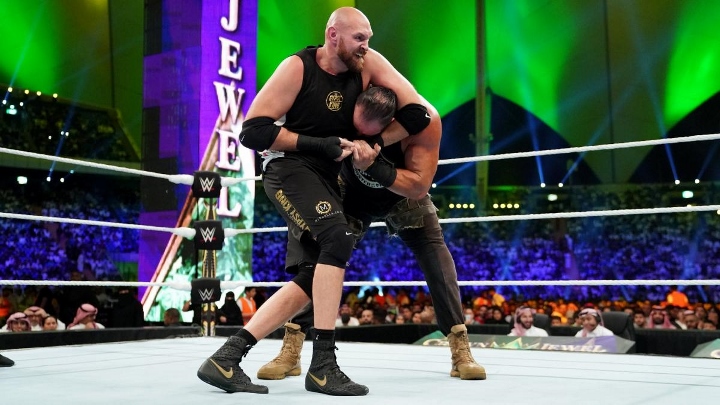 Wilder talked his fair share of trash as well, saying he won’t be satisfied with a win in February unless he knocks Fury out of the ring first, only to then deliver a flying elbow and leg kick immediately after.

“When I knockout Deontay Wilder, I want to go to Wrestlemania in April. I want Brock Lesnar. I’d knock him out, 100 percent,” said Fury.

Fury, who was recovering from nasty cuts that required 47 stitches over his right eye in September after facing Otto Wallin, was victorious in his WWE debut last October in Saudi Arabia in a one-on-one wrestling match with Braun Strowman.

Quote: Originally Posted by PunchyPotorff Except Fury is a much better boxer than Wilder. Wilder's timing is inadequate, he usually follows his opponent around the ring, and his footwork is embarrassing. Besides the 2 knockdowns... what makes you think Wilder…

Yeah probably true but Fury run with the WWE was somewhat of a FAIL and really didn't move the needle or anything for WWE. WWE fans had no clue who the F#CK he was just like I'm sure most of…

Furys not one to take serious with anything he says. He says a lot of contradictory and frankly ridiculous things.

[QUOTE=Robbie Barrett;20343095]Mind "bobblin'" that they didn't want Wilder, Wilder would jump through "leap holes" and he was fully "resteded"[/QUOTE] Hahahaha its actually mind bobbin’

[QUOTE=PunchyPotorff;20344194]Except Fury is a much better boxer than Wilder. Wilder's timing is inadequate, he usually follows his opponent around the ring, and his footwork is embarrassing. Besides the 2 knockdowns... what makes you think Wilder accomplished much of anything vs…