Fury: Wilder Performance Terrible, Lost Every Round To Old Man

Tyson Fury was not impressed with the performance from last Saturday night by WBC heavyweight world champion Deontay Wilder. (photo by Ryan Hafey)

Wilder retained his title with a seventh round knockout of Luis Ortiz in their rematch at the MGM Grand in Las Vegas.

Going into the seventh round, Ortiz was well ahead on the official scorecard - but all it took was a single right hand to put the Cuban boxer down for the full count. 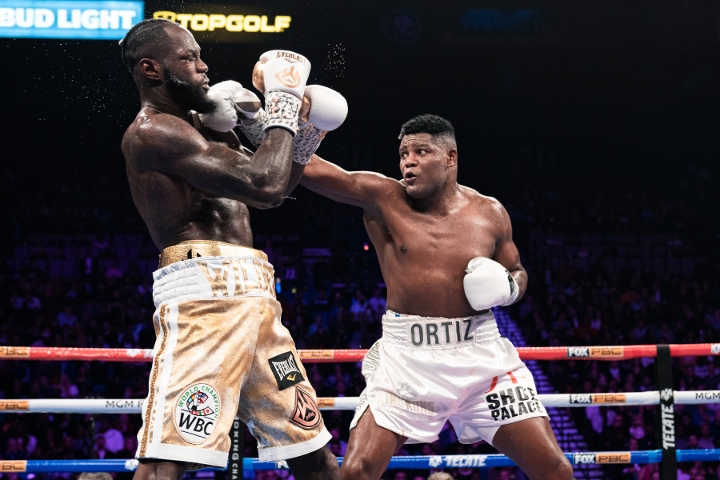 Wilder is now slated to face Fury in a rematch on February 22nd.

The first time around, they fought to a controversial twelve round split draw with Fury going down twice in the bout.

Fury was saw nothing that worried him about last weekend's win.

“Definitely not [impressed by the win], it was terrible. He lost every round to a 50 year-old-man, [and] then [knocked him] him when he slowed down, it was pants,," Fury stated.

In the immediate aftermath of last Saturday's fight, Fury made it clear that Wilder only had a puncher's chance to win.

“Wilder has nothing more than a punchers chance vs me. I’m gonna school even more than the first fight," Fury stated.

Fury’s trainer, Ben Davison, was ringside at the MGM Grand. He was impressed with Wilder's display of punching power.

“Obviously it's something you have to try to negate. How do you do it? Definitely not how Ortiz just did. Fair play, he had a good go but he got complacent and walked straight into distance. That's a recipe for disaster," Davison said.

“Mentally Tyson is the strongest fighter I've seen in history. Ortiz is a fantastic fighter but he's not Tyson Fury. Wilder was a different man this week to when he fought Tyson. Tyson got under his skin.”

[QUOTE=Fire4231;20219447]Lol...Here comes the garbage man fan. Show me where Tyson Fury beat Deontae Wilder... Send me one credible link.[/QUOTE] you must be either a fanboy, stupid or blind. Who narrated the fight for you? Steve Wonder?

[QUOTE=eco1;20215853]One of the most stupid posts I have ever seen in this place. Wilder lost to Fury, simple as that. Did you watch the whole fight or stopped watching when Tyson got k down? I suggest you go back and…

[QUOTE=hugh grant;20218748]Who's to say brazile and ortiz are much better[/QUOTE] Hmmm cuz they are.... Those guys he fought, who have they fought or beaten? Another question have you even heard of those guys before? Stop it.... Everyone on here will…

[QUOTE=KillaMane26;20215274]Easy for you to say after you chose to fight two nobodies instead of the immediate rematch. B4 yall guys milk Fury's soundbites take into account his last opponents he chose lmao[/QUOTE] Who's to say brazile and ortiz are much…