Fury: Wilder Was Definitely An Improved Fighter In Rematch

LAS VEGAS – The result might not have indicated it, but Tyson Fury feels he faced an improved Deontay Wilder on Saturday night.

Their WBC heavyweight championship rematch wasn’t nearly as competitive as their first fight 14 months earlier. Fury still acknowledged afterward that Wilder was better in some ways than when they fought to a controversial split draw in December 2018 at Staples Center in Los Angeles.

“I felt like Deontay’s jab had improved, and he did take his time more, like he said he would,” Fury said. “Yeah, and he was using his jab quite well, actually. I was very impressed with his double-jab that he was using. And credit to his team for applying that in this fight, because when you’ve got two giant guys, I think the jab is very important. It sets everything up.

“So yeah, I thought he was definitely an improved fighter to what I fought before. And he was heavier. I wasn’t able to bully him around, as I did last time, in close, because he was a lot heavier than he ever was. So yeah, I did see improvements in his game. But tonight was my night, and I was never gonna let anybody take it from me.” 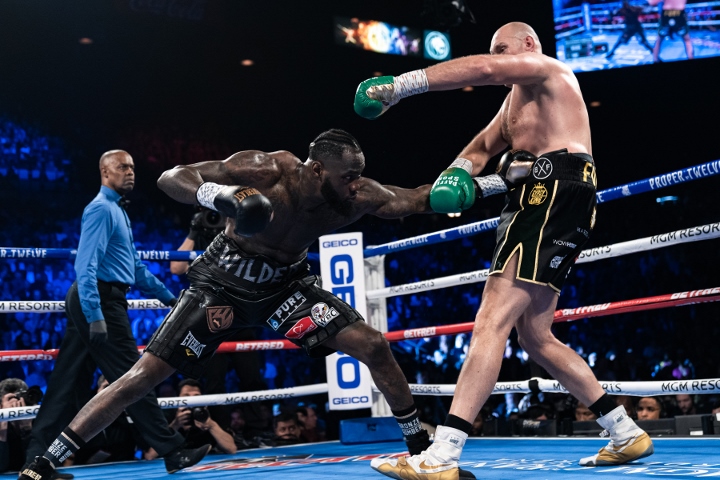 The 6-feet-7 Wilder weighed a career-high 231 pounds for their rematch, 18½ pounds more than he weighed for their first fight. The 6-feet-9, 273-pound Fury still wore him down during their physical fight.

Punch stats aside, Wilder was no match for Fury (30-0-1, 21 KOs) in their ESPN/FOX Sports pay-per-view main event Saturday night.

A heavier, more aggressive Fury scored two knockdowns, one apiece in the third and fifth rounds. The newly crowned WBC champ was way ahead on all three scorecards when Mark Breland, Wilder’s assistant trainer, threw in the towel in the seventh round as Fury was throwing unanswered punches at an exhausted Wilder.

[QUOTE=deathofaclown;20420101][/QUOTE] Good looking out, I managed to find it after your first comment. Well, he did what he said right!

Wilder lost and there is no changing that. I have never got on a fighter for making excuses because they are the ones in the ring. Those of you who are judging Wilder for the things he is saying know…

[QUOTE=Robbie Barrett;20420065]Szpilka was outboxing him clearly. Go look in the RBR even Wilder fans had him ahead.[/QUOTE] Too bad the judges didn’t.