Fury Trainer Steward: Davison Was Supposed To Be Part of Team

SugarHill Steward, the newly appointed trainer of Tyson Fury, was under the impression that he would be working alongside former Fury trainer Ben Davison before Davison and the undefeated heavyweight suddenly, yet amicably, split in December.

“I was brought in as the head trainer, but my understanding was that Ben was going to be there as well,” Steward told BoxingScene.com in an interview. 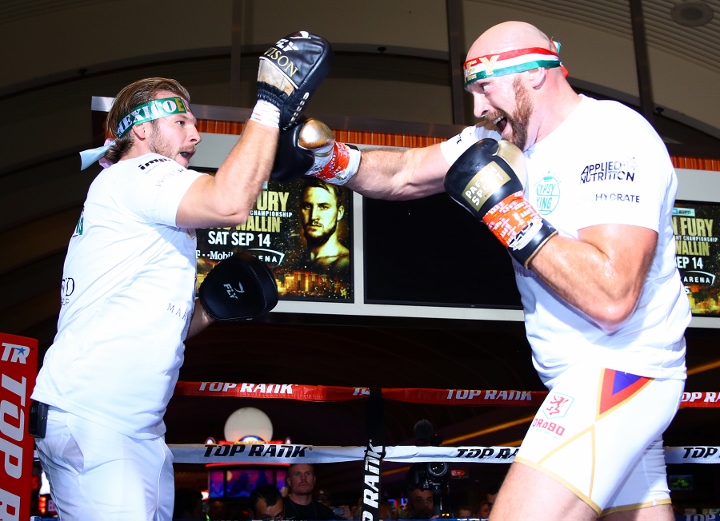 The 27-year-old Davison was scouting Wilder for the Alabaman’s KO over Luis Ortiz in Las Vegas on Nov. 23.

By mid-December, Wilder and Davison were no longer a tandem, just as Fury prepared to meet Wilder on Feb. 22 against at the MGM Grand in Las Vegas on Fox and ESPN pay per view.

“Tyson talks about him, and he doesn’t say anything bad about Ben,” said Steward. “They said it was a mutual agreement. I’m not going to overthink their relationship when Deontay Wilder is in front of us.”

Steward, the nephew of the late great trainer Emmanuel Steward, said he and Fury have kicked it off right where they left off when they originally met in 2010 at the Kronk Gym in Detroit.

“We worked together, we played together and we trained together. He knows my family history and my bloodlines,” said Steward. “People say I train just like Emmanuel. He taught me everything I know. You can’t get him anymore, but here I am, SugarHill, continuing the legacy of a legend.”

[QUOTE=Shadoww702;20347588][B]You think that Redkach has any chance tonite?? [/B]I remember reading many years ago him being listed as a top prospect to watch for and had a great amateur career.... But then things went down hill? Just seeing if I’m…

[QUOTE=SuperSuperLeeds;20345753]Not a cat in hells chance that AJ beats fury on points.. he's slower and more predictable than wilder, whom fury is about to comfortably outboutbox. AJ needs to stop fury like klitschko or he'll lose on points like he…

[QUOTE=kafkod;20345837]That's what I mean. Wilder is [B][B]not[/B][/B] a power puncher at close and mid range. He needs space to move forward with his long right hand and extend it fully. Fury can take Wilder's power away by denying him space,…

[QUOTE=MDPopescu;20346507]... the "impression" was that Davison acted more like a friend and psychologist rather than a "boxing trainer"...[/QUOTE] I’m taking Wilder by KO! Giving him another 12 rounds to time you is never a good idea. That and not even…

[QUOTE=MDPopescu;20346610]... Fury is more of a Gypsy actor... (and Gypsies don't need psychologists; we do need... ) :)[/QUOTE] You think that Redkach has any chance tonite?? I remember reading many years ago him being listed as a top prospect to…