Fury: This Time, I Won't Just Win, I'll Smash Wilder Into Next Week

Tyson Fury fully understood why he was viewed as the betting underdog heading into his first fight with Deontay Wilder.

By his own admission, he doesn’t believe he was the fighter then than he is today.

The unbeaten British heavyweight was just six months into his comeback following a 30-month hiatus by the time he stepped into the ring with Wilder in their memorable December 2018 heavyweight title fight, which ended in a disputed 12-round draw. He’s since added two wins to his ledger heading into their anticipated rematch, which takes place February 22 at the MGM Grand Garden Arena in Las Vegas, Nevada.

“The big difference is I’ve had five straight fights heading into this,” Fury (29-0-1, 20KOs) noted to Fox Sports’ Heidi Androl during Saturday’s press conference in Los Angeles, ahead of their Pay-Per-View rematch, which comes as a joint venture between ESPN+ and Fox Sports. “The first fight, I had a couple of easy fights in six months and then jumped straight in the ring with Wilder. I still beat him. 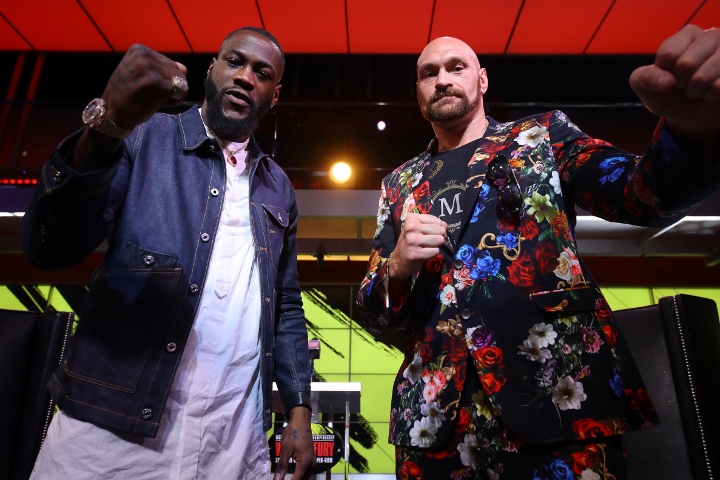 Fury went more than 30 months without a fight from the time of his career-best World heavyweight championship-winning effort over Wladimir Klitschko in November 2015 and a 4th round stoppage of unheralded Sefer Seferi in his June 2018 ring return. Two months later came another soft touch, soundly outpointing Francisco Pianeta before heading into his title challenge of Alabama’s Wilder (42-0-1, 41KOs).

Many viewers felt Fury did enough to win their first fight, despite suffering two late knockdowns. There were plans in place for a rematch to have taken place last May, only for Fury to call an audible at the 11th hour and instead sign with Top Rank and ESPN+, which forced both heavyweights to move in different directions.

Since then has come a pair of wins over unbeaten heavyweights in Las Vegas, knocking out Germany’s Tom Schwarz in two rounds last June and surviving a hellacious cut to outpoint Sweden’s Otto Wallin last September.

Wilder added a pair of knockout victories to his growing résumé, icing Dominic Breazeale inside of a round last May and overcoming a scorecard deficit to drill Luis Ortiz in the 7th round of their rematch last November.

The latter win paved the way for the sequel, with Fury’s shrewd business move earlier in the year actually making the rematch even bigger. Naturally, a key part of the promotion has been replays of the first fight, particularly Fury rising from the canvas in dramatic fashion in the 12th and final round.

It looks great for the promo package, but the brash Brit insists it’s otherwise a distant memory.

“I’m not interested in the first fight,” insists Fury, who has publicly guaranteed a two-round knockout win in the rematch. “I must beat him. It can’t end in a draw again, that might as well have been a loss. And it should be a loss for Deontay Wilder as well.

“A draw won’t do. I’m going to punch him in the face, until he falls over.”

A 3rd fight is already agreed I believe - so I do expect some kind of drama / controversy in this fight... Something like Wilder blowing an Achilles etc.

lol at people saying the first fight was a fix when wilder was chasing a KO the entire fight, knocked Fury unconscious for a few seconds and Fury just so happened to recover and get up like the undead. You…

Fury is a salesman and he is doing his best to sell. No wonder HHH wants him for WWE. Fury doesn’t have a snowball chance in hell of knocking out Wilder and if you’re actually believing his upchuck there’s a…

[QUOTE=Monzon99;20352872]Joshua has all the belts, unified all the belts, sells far far more than anyone else. Joshua is the A side superstar. All roads lead to Joshua. Fury and Wilder are minor leaguers who can't sell squat even when they…