Tyson Fury says Deontay Wilder is "running scared" ahead of the pair's heavyweight rematch in Las Vegas on Saturday.

Fury and Wilder will rekindle their fierce rivalry at the MGM Grand Arena, 14 months after a contentious split draw in Los Angeles.

Former unified world champion Fury thought he had done enough to win on points at Staples Center, though two knockdowns from Wilder in the ninth and 12th rounds, respectively, ultimately proved costly. 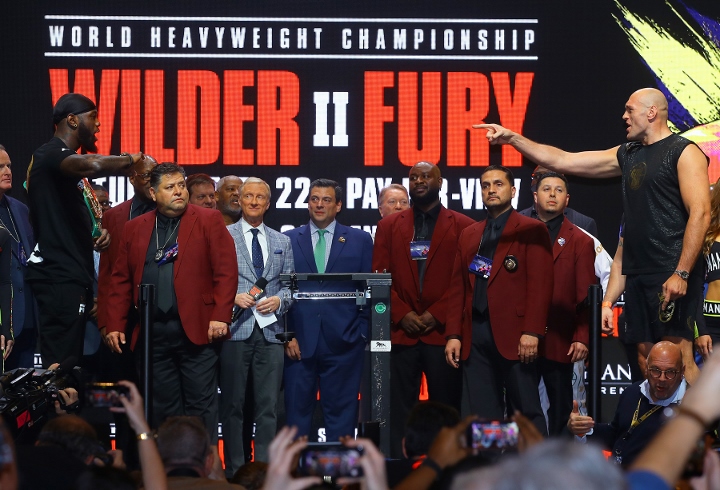 There has been no love lost between the fighters in the lead-up to Saturday's rematch, but Fury is convinced he has the upper hand, adding that he does not fear taking another punch of the caliber that Wilder landed in the final round in December 2018.

"It was good [to take the punch]. It's nice to take a big right hand like that now and again. It's what I train for and what I get paid for. It was lovely to do some work for the pay.

"It was a lapse in concentration. I feel fantastic and the training camp has gone well, perfectly. It won't happen again.

"Not worried at all [about taking a big punch]. It's what I get paid to do, train hard and fight hard."

Fury stepped back from boxing in 2019 to venture into professional wrestling. He defeated Braun Strowman in his WWE debut, at the Crown Jewel event in

Fury admitted that he suffered some pre-fight injuries early in training camp, after he was questioned about an obvious limp when observers spotted him at ringside for Conor McGregor’s return to the UFC against Cowboy Cerrone on January 18.

"Unfortunately I hurt both legs, and both ankles, in the training camp. But it’s not going to affect me in the fight because that was at the beginning of camp. It was an unnecessary accident, but, you know, things happen," Fury said.

I wonder if Fury is lying about these injuries because he wants to mess with Wilder. Otherwise, Fury would be really dumb to publicly admit to his opponent & the consumers that he injured both legs & both ankles.

Lol this clown will be lucky to last 4 rounds lol

[QUOTE=1hourRun;20405901]Gypsy-Bum, you should change your name to Mr. Potato Head ; you're constantly falling apart mentally and physically. Gypsy John had the right name for you 'Tyson', your middle name should of been 'Spinal'.[/QUOTE]Why aren't u in Las Vegas bro…

[QUOTE=PRINCEKOOL;20406538] I agree with Teddy Atlas, 5 minute mark and onwards 'In one of his recent interview Fury has stated that he cut back roadwork from 5-7 times aweek to TWICE per week etc'