Frank Warren, the co-promoter for WBC heavyweight champion Tyson Fury, has hit back at Eddie Hearn's claim that Dillian Whyte is levels above Agit Kabayel.

Fury is slated to return to December 5th in UK, with a voluntary defense, and Kabayel is the frontrunner to face him on the date.

Whyte, who was knocked out cold by Alexander Povetkin in August, was scheduled to face the Russian boxer in a rematch on November 21. 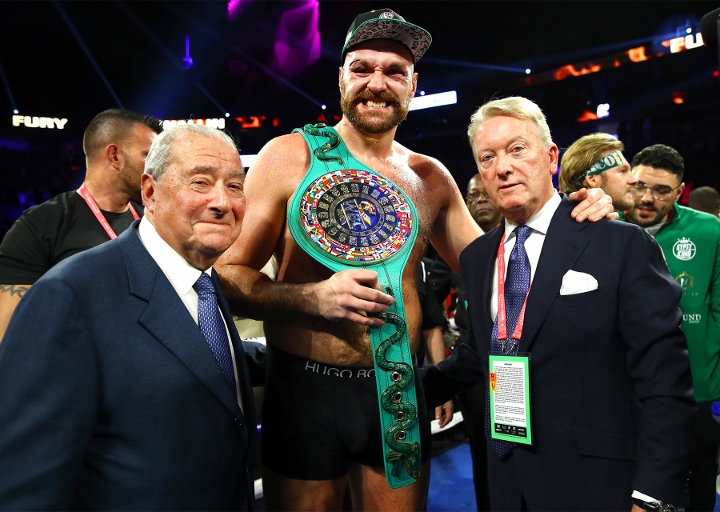 The fight with Povetkin was postponed, when the Russian boxer tested positive for COVID-19.

With Fury not having a finalized opponent, Hearn floated the idea of having Whyte step in there for a title shot.

Hearn views Whyte as the far better fighter when compared to Kabayel.

Warren is not in agreement - as Whyte had two violent wars with Derek Chisora. In the first meeting, Whyte won a razor-close and some felt controversial decision. And in the second fight, Chisora was ahead on the cards when Whyte knocked him out in the twelfth and final round.

On the other hand, Kabayel won a twelve round decision over Chisora with few issues.

"Kabayel is an unbeaten European heavyweight champion so is no pushover for Fury if we get it all secured. Eddie Hearn has been trying to push for Dillian Whyte to face Fury on December 5," Warren told The Daily Star.

"But I've made it clear over the last few weeks that Whyte shouldn't have been fighting in November after such a brutal knockout by Alexander Povetkin in August. Now they want him to step up and face the WBC champion after being poleaxed by Povetkin? That is crazy.

"Hearn has also said Whyte is levels above Kabayel but didn't the Brit have life and death twice with Derek Chisora? Kabayel had a fairly routine points win over Chisora back in 2017."

Can we just skip to Fury vs Joshua already

When you have to make a big deal about Chisora being your best win you know you are low quality. Why is Fury still fighting bums, Fury fans? I thought he is some great fighter?

Has fury obtained BBBC licence yet and been ukad tested?

Pov would be next in line. No one's going to beat Fury unless Usyk gets him to gass out