Fury: The Only Reason Wilder Took Fight is He Thinks I'm Done

Tyson Fury doesn’t believe Deontay Wilder when the WBC champion says he took their fight to prove he is boxing’s best heavyweight.

Fury figures Wilder views him as a washed-up former champion, undefeated yet damaged and incapable of boxing the way he did when Fury upset Wladimir Klitschko in November 2015.

“He’s living on the hope and prayer that the 2½ years out, I’m f***ed,” Fury said during a press conference Monday in London to promote their December 1 fight. “But I ain’t. I’m back. I’m better than ever. I’ve never been as quick, I’ve never been as powerful, I’ve never been as explosive. I’m ready. You’re only banking on me having two fights in three years, or else you wouldn’t have took the fight. That’s the only reason you took this fight, because you think I’m done. I ain’t done, pal. The only thing that’s done is you, when I get you in that ring.” 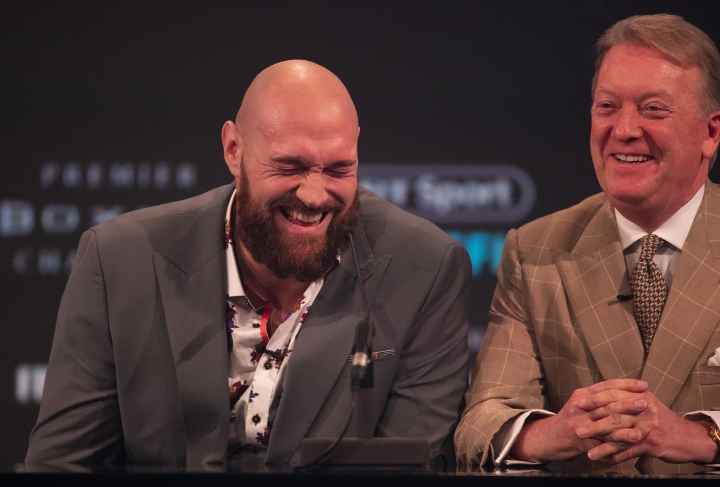 Before defeating Seferi, the 30-year-old Fury hadn’t boxed since he beat the heavily favored Klitschko by unanimous decision in their 12-rounder in Dusseldorf, Germany.

Fury postponed his immediate rematch with Klitschko and ultimately canceled it. The Manchester, England, native gave up his four titles to seek treatment for alcoholism, drug addiction and depression.

The 32-year-old Wilder (40-0, 39 KOs) will be by far Fury’s toughest opponent since he beat the retired Klitschko (64-5, 53 KOs). The Tuscaloosa, Alabama, native disputed Fury’s theory regarding his motivation during their press conference Monday at BT Sport’s headquarters.

“No, I don’t think you done,” Wilder told Fury. “I don’t want you to be done. I don’t get no gratification [from] you being done. I want you when you feel like you, mentally, can beat me.”

“Tyson, I wanna correct one thing,” Finkel said. “We didn’t pick to fight you, or you to fight us, because we thought you were easy. We believe you’re the best out there. [Fury interjected by saying, ‘Do you?’] Yes, and that’s why we wanna fight the best and only the best. And we have nothing but respect because your countryman [Anthony Joshua] didn’t have the guts to step up like you did.”

Their press conferences in New York and Los Angeles are open to the public.

[QUOTE=Muz;19160141]Black Americans havent been dominant in boxing since holyfield and bowe. You drinking the kool aid and listening to fake ass black bixing propaganda channels. You have very little perspective, just like your education.[/QUOTE] The GREATEST fighters in HISTORY are…

Fury does not have the power to KO Wilder. His best shot at winning is with a UD

[QUOTE=Tha Kid;19158175]What in the entire **** are you talking about??!! Black people have DOMINATED boxing since Jack Johnson...you dumb stupid mf 😭😭😭[/QUOTE] Black Americans havent been dominant in boxing since holyfield and bowe. You drinking the kool aid and listening…

[QUOTE=Robbie Barrett;19157915]A message that he cherry picked a fighter that is coming back from being hugely out of shape and needed more time to see how much he had left? If Joshua chose Fury you clowns hyping Fury now would…

If Fury can't hurt Wilder, he can't beat Wilder. Period. Wilder respected Stiverne (the first fight) and boxed on the outside, increasing his shots and punching output as he realized he had him. He had respect for Ortiz, and basically…