Fury: I'm No Bum Swinging For a KO, I'm a Calculated Technician

LAS VEGAS - Tyson Fury (27-0-1) recently moved his training camp to Sin City as he enters the final stages of his preparation for his June 15th showdown against Tom Schwarz (24-0). The fight takes place at the MGM Grand Garden Arena on The Strip and will be streamed live on ESPN+.

While Schwarz is undefeated, he is largely unknown in the United States. Even though Fury is regarded as one of the top three heavyweights in the sport today and is the prohibitive betting favorite, he refuses to look past his German opponent. With highly lucrative fights against Deontay Wilder and Anthony Joshua potentially on the horizon, Fury remains focused on the task at hand.

"I don't take anybody lightly. I am training like a Trojan warrior for Tom Schwarz. I feel the best I have felt in a long time. I never cut corners in training camp. I never do anything I shouldn't do so Tom Schwarz is getting a good Tyson Fury and I know I am getting the best Tom Schwarz ever," Fury told BoxingScene.com. 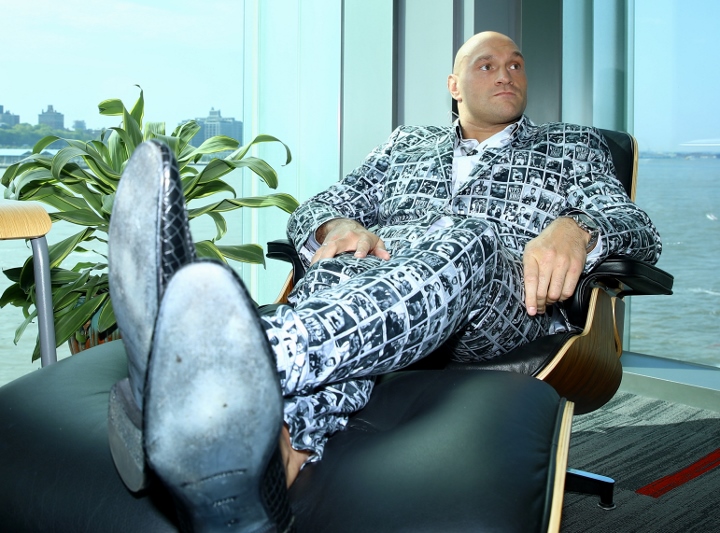 This will be Fury's first fight in Las Vegas.  He previously stated in several interviews that he didn't want to fight in Las Vegas unless he was the headliner and he is doing exactly that in his 29th professional fight.

"It feels fantastic. I feel like I am on top of the world. I am walking on water right now.  It is a dream come true to fight here in the fight capital of the world in the biggest venue, the biggest stage. I am delighted about being here and I can't wait to put on a show," Fury stated.

As for the fight itself, Fury said that everyone can expect a dominant performance. He wouldn't speculate whether he would knock Schwarz out or not but said that the German will definitely suffer his first career defeat.

"Listen, I am the Master of Disaster, the King of Sting. What I do in the division of heavyweight boxing is very unusual. I am a master of sweet science. I am not just average bum who goes in there looking for a swinging knockout. I am a calm, cool. calculated technician and what you will see is a masterclass performance. Nothing more and you wouldn't expect anything less," said Fury.

[QUOTE=sayf;19783503]I enjoy watching a boxing clinic if there's real skill involved. Knockouts are great to see, but it was also great to watch fights like Floyd vs Canelo, or even his fight against Marquez, its not exciting but its enjoyable…

[QUOTE=Squ□redCircle34;19787038]Whoops spoke too soon, Wilder just announced he will do it again early next year with Fury likely Showtime/ESPN co PPV! The rematch will sell like hotcakes! Hope you’ll enjoy it like the rest of us will![/QUOTE] Lolx.....I don't know…

[QUOTE=Laligalaliga;19785230]Smiles.....if wilder is so confident that he deserved a draw, he can go do it again this time on ESPN and show the world that the first was a near miss. That shouldn't be hard to do I believe.[/QUOTE] Whoops…

Quote: Originally Posted by PunchyPotorff He beat Wilder. Only boxing politics made it a draw. [QUOTE=True That;19783208]I definitely agree with that, he did beat Wilder.[/QUOTE] Thanx

[QUOTE=Squ□redCircle34;19785118]Yes, agree to disagree we will! Fury was gifted with a ref who put money on Fury and did everything he could to keep him in the fight! I’m sure Jack Reiss is thanking Fury for his gifts Tyson gives…