Tyson Fury scoffed Monday when asked if he has watched footage of Tom Schwarz’s fights.

The undefeated former IBF/IBO/WBA/WBO heavyweight champion claimed during a conference call that he doesn’t need to study Schwarz’s style to feel confident about beating his largely unknown opponent. He’ll learn all he needs to know, according to Fury, as soon as their scheduled 12-round fight starts Saturday night at MGM Grand Garden Arena in Las Vegas. 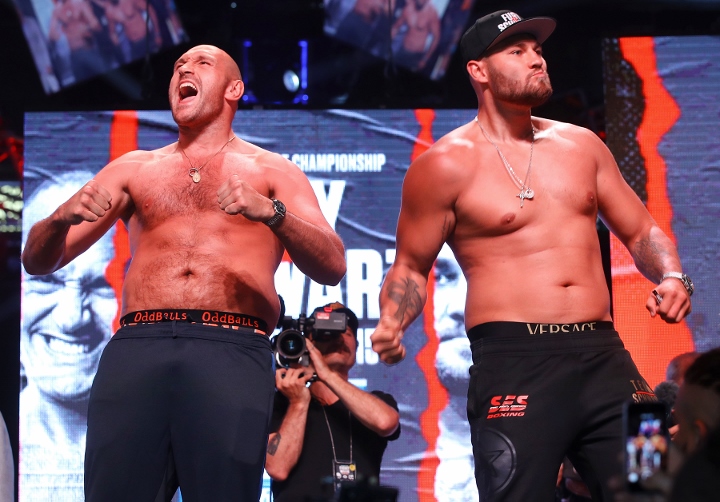 The 6-feet-5, 240-pound Schwarz (24-0, 16 KOs) hasn’t beaten a ranked heavyweight, yet the 25-year-old contender is rated No. 2 by the WBO and No. 8 by the IBF. That was enough for veteran promoter Bob Arum and his team to select Schwarz as the first opponent for Fury (27-0-1, 19 KOs) in the entertaining Englishman’s new deal with Arum’s Top Rank Inc. and ESPN.

“We looked at the rankings, and we saw that [in] virtually all the organizations, Schwarz was a top-five guy,” Arum said. “Top-two in the [WBO]. We had never promoted him or had anything to do with his people, and we reached out to them to see if they would be interested. He’s an undefeated fighter, popular in Germany, 24 wins and no defeats. We felt that he was the best possible opponent for Tyson Fury.

“One thing we wanted to make sure is we didn’t match Tyson Fury with a small heavyweight, because obviously, long-term, his goal is to fight [Deontay] Wilder. And at that point, [Anthony] Joshua. Of course, that’s less likely now. So, we wanted a big guy. Schwarz is 6-foot-5, and we felt that it would be an interesting fight and a good fight.”

ESPN+ will offer Fury-Schwarz as the main event of a stream scheduled to start at 10 p.m. ET/7 p.m. PT.

[QUOTE=Deontay Wilder;19832116]C'mon Tyson, pull yourself together. If you don't put Tom flat on his back, you're washed up![/QUOTE] Have to agree with that. This fight is a major mis-match I watched highights vs Gashi. Tom is easily hittable. His defense…

Tom Schwarz is better than Ali. Because Ali lost 5 times and Schwarz has never lost. That makes him 5 times better. If Tyson comes through this fight, then he becomes the new.... Greatest! Ali would never have dared to…

[QUOTE=Southpaw010;19832173]Fury is laughable acting like he's number one. In what Universe does #1 face #56? Arum and Fury act like Tom Schwarz is a machine but if you watch his fight against Gashi, it's obvious he is WELL below top…

Just looking back? Fury was 247 pounds vs Wladimir Kiltschko, and he is now 263 pounds. I think afew months back in my opinion? He looked over-trained, so I think between 255-260 is a good weight for Fury, but I…

There's a documentary on Channel 5 tonight at 9, if anyone wanted to watch it before his fight later on. The words Tyson Fury mean many things to many different people. pic.twitter.com/3Eg5XomXDN— Channel 5 (@channel5_tv)…