Fury: If Pianeta Chins Me - I'll Crawl Over and Kiss His Feet!

Tyson Fury has vowed to make “Italian sausage” out of German rival Francesco Pianeta or kiss his feet.

The outspoken heavyweight made the statement in Belfast ahead of his latest comeback fight, after which he said he wants to go on to become a five-time world champion.

The bill for Windsor Park in Belfast on Saturday is set to provide one of the biggest boxing events the city has ever seen. 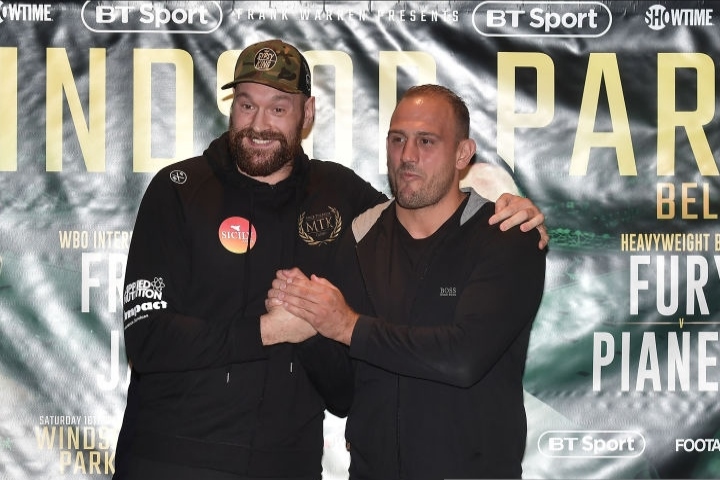 Fury was confident about his prospects of winning his fight.

“If I can beat Francesco Pianeta, I’ll have beaten another boxer, big deal, but if he beats me, he is going on to something very big, life-changing for him, and if I can’t beat Pianeta, I am going nowhere.

“I’m going to smash him to pieces, make Italian sausage out of him.”

Speaking through a translator, Italian-born Pianeta said he rates Fury highly, but the 33-year-old vowed to give the fight his best, and said he was looking forward to it.

Pianeta has won all but five of his 40 fights, with Wladimir Klitschko, Ruslan Chagaev and Oliver McCall the bigger names he has encountered.

Fury has lost 10 stone in weight in a bid to become world champion again.

“The old Tyson Fury is gone, Tyson Fury from three years ago and beyond is finished. I’m not looking to live in the past, I’m looking to go on and improve on what I am today and tomorrow,” Fury said.

“The new Tyson Fury is going to put on a good fight, whether that will be better or worse than the last Tyson Fury, we’ll have to wait and see on Saturday.
Tyson Fury is no stranger to world title belts

“I want to win a world title again so I’ll have to raise my game. After having three years out of the ring and after ballooning to 28 stone and then down to 18 and a half stone – it’s a terrible terrible uphill battle, to lose that weight is mentally and physically draining, to train continuously for 12 months, you have to have a want.

Now he says he is aiming to become a five-time champion.

“I always say aim for the stars and set big targets.”

Fury said Belfast fight fans are “among the best in the world”.

He added: “Boxing on an outdoor stadium is something new for me. I boxed in a football field in Germany but it had a roof on it, so to box outside, it’s a new experience and I am always happy to take on a new challenge.

If Fury defeats Pianeta on Saturday, he said his next target will be American Deontay Wilder.

[QUOTE=Oshio;19022826]As many as it makes fanboys happy. Don't be surprise to read same recycled article again[/QUOTE] I just read another recycled one, Tyson Fury: I need to raise my game to win a world title..... uses the same quotes for…

Just like his last opponent, this guy isn't in there to actually fight and try to hurt Fury, there's too much at stake for Fury anf boxing. He is there to joke around, share some hugs and kisses and collect…

[QUOTE=Vinnykin;19022101]How many articles can Boxing Scene get from one press-conference?[/QUOTE] As many as it makes fanboys happy. Don't be surprise to read same recycled article again

Well, yeah. Pianeta has like 50% KO ratio against bums and is 100 something ranked HW. While I don't think Fury is in top20 in his current shape, but losing to this guy would be atrocious.