Fury: I Wasn't Trying To Lose Weight, The Weight is Not Important

Tyson Fury weighed in 42 pounds heavier than world heavyweight champion Deontay Wilder for their blockbuster rematch, which is taking place at the MGM Grand in Las Vegas.

Wilder will put his WBC belt on the line against challenger Fury in the second instalment of their rivalry on Saturday after the pair fought out a contentious draw in December 2018 at Staples Center in Los Angeles.

Fury (29-0-1) was almost 50 pounds heavier than Wilder (42-0-1) in the first meeting and the former WBA, IBF, IBO and WBO champion carries another huge weight advantage heading into the second showdown. 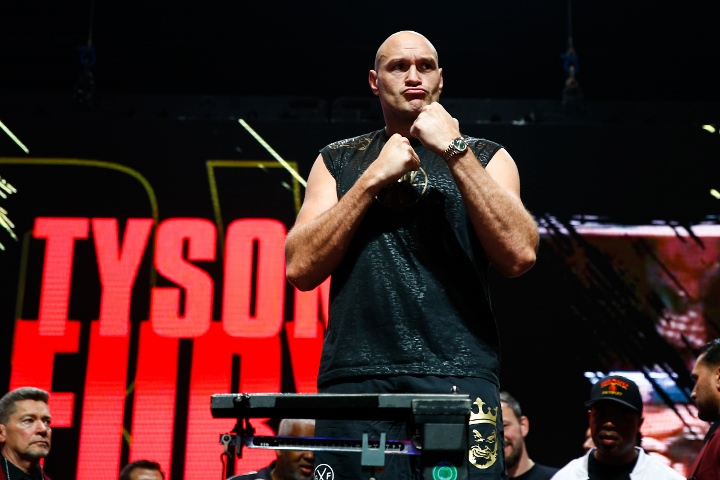 Stepping onto the scales on Friday, British boxer Fury weighed 273 pounds, up from his 256.5lbs weight in 2018.

Fury believes there is no issues with coming in heavier, as he stated for the past few weeks that he planned to enter the ring at around 270-pounds.

“The weight’s not a problem. It’s 273 pounds of pure British beef,” Fury said.

Fury made it clear that at no point was he trying to lose weight for the contest.

"I feel comfortable with the weight. I'm where I want to be. I haven't been trying to lose weight. I'm a giant heavyweight. I've been eating clean, eating well and whatever weight I weigh on the night is really unimportant," Fury said.

[QUOTE=-Kev-;20406233]I think it’s crazy that HW has no limit. If Wilder wins this, which I think he does, that will be a very big win to overcome 42lbs vs a top HW.[/QUOTE] Heavyweight is supposed to be the open class,…

I think the weight thing is being over analyzed. Thank God the day is finally here After going back and forth with my final pick I've decided to just say f-uck it and not pick a winner. Im just gonna…

Sam Peters, the Nigerian Nightmare easily comes to mind and he was punished for weighing how many stones.... The only difference is that Fury is more skilled with good ring IQ