Fury: I Hope Joshua Wins - But I See Ruiz Doing The Same Thing

Heavyweight contender Tyson Fury would like to see his countryman Anthony Joshua get revenge against Andy Ruiz - but he doesn't expect that scenario to take place.

Back in June, Ruiz secured a seventh round stoppage over Joshua to capture the IBF, IBO, WBA, WBO heavyweight titles. Joshua went down four times in the fight.

The rematch takes place on December 7th in Saudi Arabia. 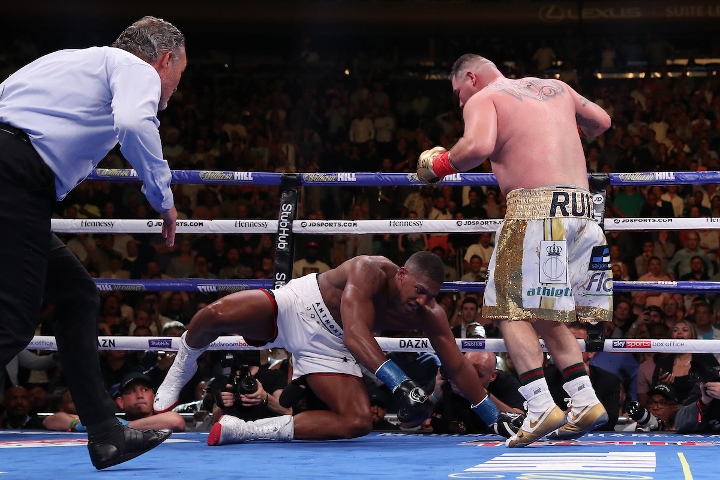 Fury explains that a fight against Joshua would generate a lot more business, especially in the British market - but a showdown with Ruiz would not be as big of a money-maker.

However, he feels Ruiz will once again walk away with the win - on the back of a dramatic knockout.

"It can go either way. I think Joshua is going to try and make it boring, use the jab, but then again that only works until you get tagged. And then you get tagged and you’ll start fighting, doing what you naturally do. So that’s what will happen. Listen, I don’t know. I’m not a Nostradamus. I hope Joshua wins because it puts him back in the mixer for a big fight with us, because Andy Ruiz ain’t really that big of a draw," Fury told IFL TV.

"I hope Joshua wins but I see Ruiz doing exactly the same thing again. Not knock it on the head, but if you can’t beat Andy Ruiz, where are you going? Listen, there’s tonnes of money to be made in the game, there’s always big fights. Derek Chisora has had nine loses and he’s still fighting big fights and he’s still going to get more fights.

"So a couple of loses, it doesn’t matter, it’s all about having fun and enjoying entertaining the boxing fans. And I’m sure there’s plenty of good boxing nights left in all of us yet, me, Joshua, Wilder, Ruiz, Dillian Whyte, Derek Chisora, whoever. I’d like to see Derek Chisora have a shot with AJ, that would be a good fight."

Depends on How He Cleans Joshuas Clock... Mexicans are probably the largest Demographic of Paying Fans... He Wins in Fashion, He'll become a Big Draw...

Furys not very good at predictions ,hes been betting against Joshua since Whyte which was 2015 so he was bound to get a right pick sooner or later last time. AJ will fight Usyk sometime in 2020 for a unification…

"It can go either way. I think Joshua is going to try and make it boring, use the jab, but then again that only works until you get tagged" Sounds like Fury describing himself.