The unbeaten WBC heavyweight champion knocked out Dominic Breazeale in the first round and finished off Luis Ortiz in the seventh round in his two fights since his controversial draw with Fury. England’s Fury still noticed plenty of flaws in Wilder’s performances, even in his two-minute, 17-second knockout of Breazeale on May 18 at Barclays Center in Brooklyn.

Fury is sure Breazeale buzzed Wilder (42-0-1, 41 KOs) before Wilder blasted Breazeale (20-2, 18 KOs) with a right hand that knocked his mandatory challenger flat on his back. Breazeale, hurt and backed into a corner, hit Wilder with a right hand to the side of his head and Wilder eventually held him.

“I saw the fight with Dominic Breazeale,” Fury told a group of reporters this week while promoting his rematch with Wilder at MGM Grand. “The first round he got wobbled himself. He got clipped and he was going. Then I seen [Wilder] knock him out, [Breazeale] walk into a big right hand. So, that wasn’t really any improvement. That was just like what he does. And then the second fight with Ortiz was pretty much similar to the first fight, but a bit shorter.” 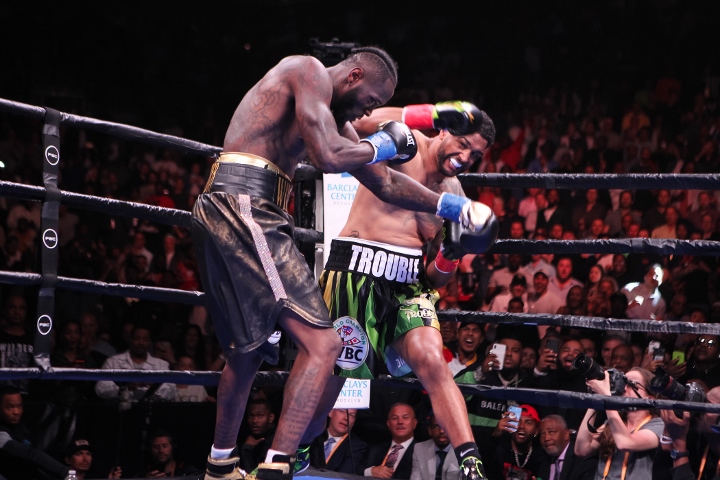 “And when he stood there for too long, he got clipped and that was it. He even got back up, though, so he can’t even keep a 50-year-old man on his back. So, yeah, we’re talking about the biggest puncher in history, and he couldn’t keep a 50-year-old down. So, there’s something to be said because he knocks these men [down] and they always get back up.”

Ortiz got to his feet, but he couldn’t beat referee Kenny Bayless’ count and Bayless called a halt to their fight with nine seconds remaining in the seventh round. Wilder knocked down Ortiz three times in their first fight and stopped him in the 10th round of that March 2018 bout at Barclays Center.

Breazeale also got up before referee Harvey Dock counted to 10, but he clearly wasn’t in any condition to continue.

Based on those two outcomes, Fury (29-0-1, 20 KOs) doesn’t think he learned anything about Wilder from those two fights that he didn’t already know.

“Nothing,” Fury said. “You know, before I beat him the last time, he already beat Luis Ortiz then. So, he’s only had a one-round blowout and then someone he already beat before.”

[QUOTE=Nomadic;20406756]Sorta like Big George (250) did to Moore.[/QUOTE] Well kind of but you saw it last night. difference is Fury is very fast handed even at 270 .he can force a knockout not wait for one.

[QUOTE=ShoulderRoll;20406653]Ther's a lot of bluster coming out of the Fury camp but it's just a deflection. He is obviously stressed about the prospect of needing to play perfect defense for 12 rounds against Wilder, without making even one mistake. It's…

[QUOTE=Oldskoolg;20406690]This is a daft statement....wilder wasn’t hurt by brezeale, he was punched. Even so, breazeale is a hard puncher and this wouldnt be any more shameful than let’s say whyte hurting Joshua....both men have big punches. Fury on the other…

[QUOTE=pretty ste;20406611]Lmfaoooooo Brazeale never hurt Wilder never he landed good punch but never hurt Wilder but we seen fury hurt by Otto wallin in the 12 rounds also got busted up by a carpet installer who's ranked 50[/QUOTE] Both Wilder…

[QUOTE=ShoulderRoll;20406653]Ther's a lot of bluster coming out of the Fury camp but it's just a deflection. He is obviously stressed about the prospect of needing to play perfect defense for 12 rounds against Wilder, without making even one mistake. It's…