Fundora: Just Trying To Make a Place At 154 And Hopefully Become Champion

Whether in front of a rabid crowd or surrounded by four walls, Sebastian Fundora will always deliver the same message.

The point he intends to drive home every time is that he is the best junior middleweight in the world.

“It's just the work that we're trying to display that—for the last fight, for the fight before that—we're just trying to make a place in the division and hopefully become a champion,” insists Fundora ahead of what will be his third fight of 2020. 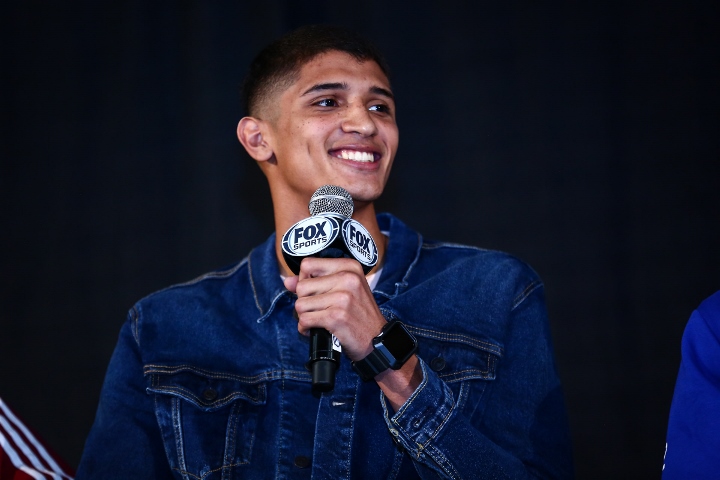 The unbeaten 6’5 ½” contender from Coachella, California was scheduled face Los Mochis, Mexico’s Jorge Cota (30-4, 27KOs) in a scheduled 12-round battle - but it was revealed on Wednesday that Cota had tested positive for COVID-19 and quickly replaced by late-sub Habib Ahmed.

Despite the ongoing coronavirus pandemic, Fundora (15-0-1, 10KOs) has managed to remain more active than most others in his position, The 22-year old southpaw opened up the year with a 10-round decision over unbeaten Daniel Lewis this past February. The bout came in support of Tyson Fury’s 7th round stoppage of Deontay Wilder in front of nearly 17,000 fans and as part of the highest grossing PPV event of the year.

Six months later came perhaps Fundora’s most notable win to date, a 6th round stoppage of Nathaniel Gallimore this past August. The fight took place behind closed doors, without fans in the building at Microsoft Theater in downtown Los Angeles.

Fundora’s third fight of the year will revert to old form, with event handlers hoping for a socially distanced crowd of 20,000 this weekend. It’s a welcomed scenario, though the rising contender was already prepared for the possibility of once again fighting only in front of essential personnel.

“All I'm worried about is the guy in front of me,” insists Fundora. “But it's pretty exciting to have fans back in the building.  I'm pretty excited about that.  It's a better feeling. I mean it's obviously different (fighting without fans) because you still have the pressure of the TV and everything on you.

“But, yes, I heard my coach, I heard the commentators, that's how close everything was. It wasn't that bad. I can't complain. It's still a fight. I still kept everything prepared for that fight and the fans not being there didn't really change that.”

Of course, the fact that fans will be in the house means more witnesses to his ascension though the ranks. It’s why his team—led by promoter Sampson Lewkowicz—sought an experienced foe like Cota for his final fight of the year before what is hoped to be a breakout 2021 campaign.

With Ahmed (27-1-1, 18 KOs), he faces an opponent with a single loss on his record - against then super middleweight champion Gilberto Ramirez in 2018.

“It's just [about] showing the crowd that we can step it up,” insists Fundora. “Showing the fans that we're not here to play, we're actually here to do something in this division.”

Fun fighter. I would not sleep on him.

This is a pretty deep division. The only champs are Charlo and Texeira. Castano will be battling for Texeira’s title, so that’ll give us the winner of that fight going against Charlo hopefully next year. If Fundora can keep improving,…