Stephen Fulton Jr. is in a good place.

And if a fighter’s demeanor – particularly a cool, confident, almost playful mood – only five days before entering the ring is indicative, it could be a very big weekend for the little Philadelphia belt-holder.

In fact, the 25-year-old super bantamweight will be introduced as a reigning and defending champion for the first time on Saturday night, when he heads about two hours up I-95 to appear on a Showtime-telecast event from the Barclays Center in Brooklyn.

Fulton, now 17-0 with eight knockouts, will risk his IBO share of the 122-pound empire against fellow unbeaten Arnold Khegai (16-0-1, 10 KO) in the first of two fights to be aired beneath the Danny Garcia-Ivan Redkach welterweight main event.

“Oh, I know it. It’s going to sound amazing,” said Fulton, who earned the belt with a 12-round defeat of veteran Paulus Ambunda last May. “It’s the first time that I’ve fought on a Danny Garcia show, and I’m excited about that. I don’t think too much about it because I know that I will seize the opportunity.

“I will steal the show. I know what I’m coming to do. I will perform at my best.

“It’s not me putting pressure on myself, it’s just what I know about myself. I’m an entertainer. I come to give the fans what they want. And I know that I will do that. It’s just who I am.”

And as for those who dismiss the “IBO champion” part of the equation, he’s got a ready reply.

“Some people try to shy away from the IBO, but I ain’t having it,” he said. “They sometimes will bill me as a ‘top contender’ or an ‘unbeaten prospect,’ but no, I’m not a top contender. I’m the IBO champion. I earned that status whether they like it or not, and I would like to be addressed by that name.

“That’s how I feel. I feel like they’re hiding my accomplishment by not regarding me correctly.”

Raised in a rugged North Philadelphia neighborhood, Fulton took up boxing as a 12-year-old and ultimately ascended to title-winning success in Silver and Golden Gloves programs while training in a West Philadelphia gym named after late middleweight contender James Shuler.

He turned pro at age 20 and scored seven wins within 12 months, and ultimately beat five fighters with unbeaten records by the close of 2017. He parlayed that success into a spot as Carl Frampton’s lead training partner prior to the Northern Irishman’s fight with Nonito Donaire in April 2018. 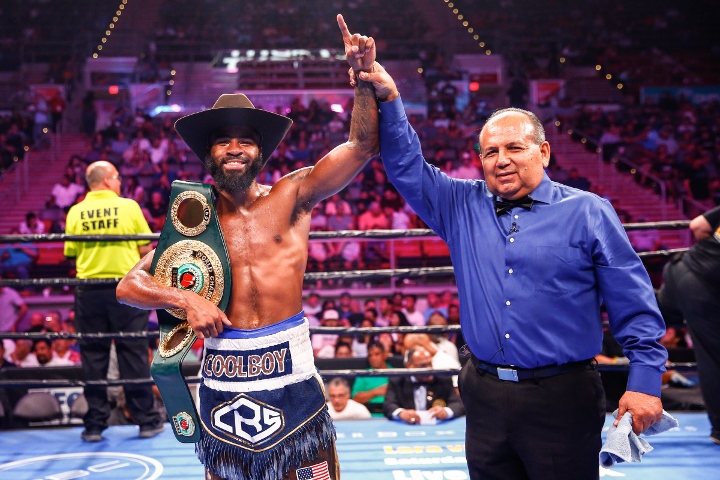 “Stephen’s a fighter with enormous talent,” he said.

“The difference between Stephen and other sparring partners we’ve had over here is that he wanted to learn and improve. I’m very impressed with his potential.”

Fulton returned to the U.S. and won two bouts of his own in 2018, then added another victory in January 2019 before the one-sided dethroning of Ambunda, who’d gone 27-2 in a career stretching back to 2007 – when his eventual conqueror was only 9.

The winner earned 120-107 margins on all three scorecards.

In a subsequent bout three months later, Fulton made a quick jump to featherweight for a sixth-round KO of Isaac Avelar, who’d arrived at the ring in Edinburg, Texas with a pristine 16-0 record.

Saturday’s challenger, Khegai, incidentally, has 16 wins and a draw in 17 professional fights – making him the seventh unbeaten fighter to stand across from Fulton.

“I’ve watched him one or two times. I’ve seen what I had to see,” Fulton said. “I’ve seen enough.

“He won’t be the same person he was against those guys because of the type of fighter that I am. He comes with a lot of aggression. A lot of ‘ah, ah’ and loud noises. I see a lot of things that I’m going to take advantage of. And it’s just going to be my fight. He’s going to fight the way I allow him to fight.”

The two are listed just four slots apart – No. 29 (Fulton) and No. 33 (Khegai) – in the Independent World Boxing Rankings, with Fulton’s defeat of Ambunda, then ranked 27th, far outpacing any of Khegai’s wins.

For the record, WBO champion Emmanuel Navarrete is ranked No. 1 at 122, followed by IBF/WBA champ Daniel Roman at No. 2 and WBC title-holder Rey Vargas at No. 3.

“Right now, I’m focused on what’s in front of me. After that, we’ve got a lot to talk about,” Fulton said.

“Once I come out (Saturday night), you’ll know it’s my night. By seeing my energy and how I carry myself, it’ll be my show from Round 1 until as long as the fight goes.”

[QUOTE=Bronx2245;20338346]Cool Boy Steph...Let's Work! Philly got embarrassed last weekend! Do it for your city![/QUOTE] Two weekends in a row actually. Rule of threes incoming. He has a couple decent wins but looked pretty vulnerable vs Adam Lopez. His opponent is…

Cool Boy Steph...Let's Work! Philly got embarrassed last weekend! Do it for your city!

lol So ldbc boxing is so in the gutter we’re counting IBO title fights now? And no, he is not unbeaten against unbeaten fighters. The only two opponents of note he's faced, Greer(who has since gone on to be completely…

Oh, yeah? I'm backing Khegai at 8.5. I would not be surprised if he knocks out Fulton. The guy is a pitbull.