Tyson was scheduled to enter the ring on September 12, to fight former four division champion Roy Jones Jr. in an eight round exhibition bout.

The contest has since been pushed back to late November. 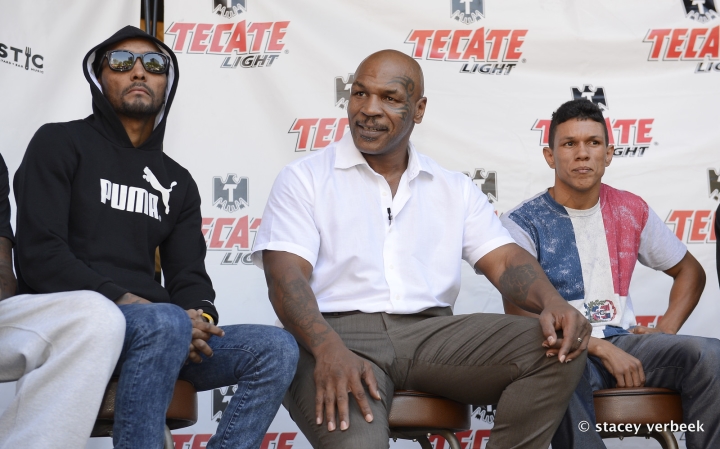 Tyson, 54-years-old, has not been involved in a sanctioned fight since 2005, when he was stopped by heavyweight journeyman Kevin McBride.

Jones, 51-years-old, was an active fighter until early 2018. Since then he's retired and began to train a stable of boxers in the last two years.

Froch wonders if Tyson will mentally lose it - if he begins to gas out and take punishment.

Tyson's most infamous fight is the 1997 rematch with Evander Holyfield.

In that fight, Tyson was disqualified when he mentally snapped in the third round and bit off a piece of Holyfield's ear.

"Would he lose the plot like he did against Holyfield and take a chunk of the old ear off? There could be a danger where he gets really frustrated. Those 16-ounce gloves are going to be more difficult to knock his opponent out. And then they’re going to be blowing out of their arse after three or four rounds, surely?," Froch said on his podcast.

"We’re blowing out of our arse after four rounds as young professional fighters. We just manage the recovery and breathe differently and go a bit flat-footed through the fight. But when you’re in your 50s, you’re absolutely exhausted and you can’t recover. Your fitness is your ability to recover and you can’t recover when you’re old. So there is a danger of this becoming a no-contest after four rounds, there really is."

Froch wonders alot like what happens if i stick my chin out as a form of defense instead of blocking my whole career? Would I have brain damage? Or can I still beat off to calzaghe every night?

froch is just jelous, poor froch made bugger all money and thats a well known fact,compaired to any other middle weight champs around the world, this story is nonsense made up by a fool and spread by haters.....

[QUOTE=Fighter78;20700055]I just hate how these weak UK MF'ers talk....."you've lost the plot mayte"...😆😂😂😂.....weak mf's in every way possible[/QUOTE] I suppose Americans are strong are they? Youre the country that gave the world emotional support animals, have a word with yourself.