Froch Reacts To Groves: Referee Did Him a Massive Favor in First Fight

A few days ago, George Groves explained that he was still in firm disagreement with referee Howard Foster's decision to stop his first bout with Carl Froch in the ninth round.

Groves had dropped Froch in the first and was up on all three of the official scorecards when the contest was stopped.

The outcome led to a rematch the following year, with 80,000 fans packing Wembley Stadium to watch Froch knock Groves out in the eight round. The fight was a close split decision on the cards at the time of the knockout. 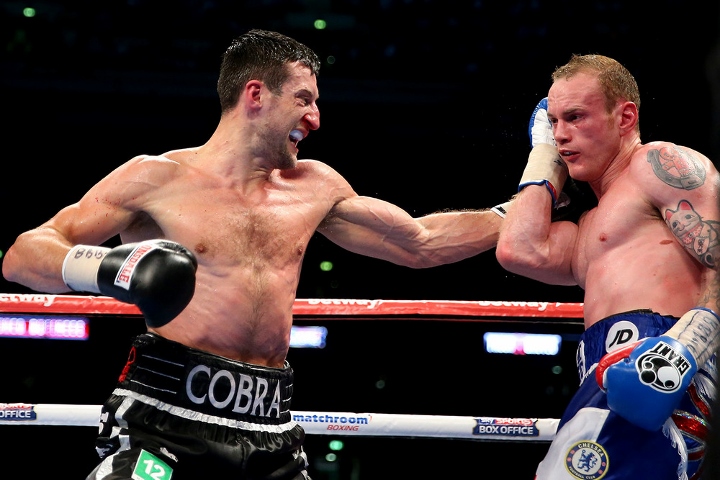 The first time around, Groves believes that he could have pulled off a knockout if there had been more time in the first round.

"I think it was funny what he said," Froch told Sky Sports. "He's quite a character, I enjoyed it, but that thing about knocking me out was nonsense.

"What else is he going to do? He hit me with loads of shots after that. I went back in swinging like an idiot, missing. He beat me to the punch and hit me with about five or six absolute peaches of punches. He couldn't have caught me any sweeter after the knockdown, and I was still stood there.

"One minute doesn't give you the time to recover, that's not enough. Then I had rounds two, three, four, five and six, which he landed loads of shots on me. It gives me a headache watching the replay actually. No, another minute wouldn't have helped him, because I'm brutal. So tough and strong and I recover quick, I've got a granite jaw. I am 'The Cobra.'"

And Groves certainly believes Foster should have given him a lot more time when the contest was stopped.

He believes Groves was completely exhausted and the referee saved him from the scenario of being brutally knocked out.

"He emptied his tank in that sixth round and I had my successes as well when I watch it back," said Froch.

"I landed a few myself, but he did beat me to the punch, and he did have a lot more success than me (in the sixth round).

"He went back to his corner at the end of that round, absolutely shattered. I knew he was gone. He couldn't budge me and he knew he couldn't do anymore. I was getting my second wind. I had recovered from the first round knockdown. I was catching him, he was tired. The referee done him a massive favour, I'll always stand by that. What a perfect intervention by the A-star referee, that is Howard Foster."

[QUOTE=Jack_*****;20586180]Froch is just a massive ego with a massive nose.[/QUOTE] Not since his rhinoplasty the big ponce. Congratulations to SpaceX and the NASA astronauts for their successful launch this today. Why post this here? Because froch thinks the earth is…

Groves took a beating in the first fight, in the process of giving out a beating [B][U]'He was also beaten up'[/U][/B] by a man who was much harder physically. Froch has the fight progress was becoming immune to Grove's power,…

[QUOTE=ArturoBalboa;20585185]It doesn’t sound contradictory, I understand exactly what you mean. It’s entirely understandable to believe the fight was going away from groves and the result was almost inevitable and also that the stoppage was premature. There is no way at…

For someone who achieved so much he does come across as quite insecure. I can't imagine Wlad arguing this ****. In fact none of his opponents complain about unfairly losing to him. Not even Haye. Froch needs to grow up.…