Free Agent Canelo Calls The Shots, So What Are His Biggest Fight Options?

Canelo Alvarez, the pound-for-pound king and biggest star in boxing, has more options for significant fights than anyone. And he’s in position to make any of them happen if he really wants it.

Not only is Alvarez the biggest draw, which means his opponents can make more money by multiples fighting him than anyone else, but he can also slide up or down in weight to fight in three weight classes – middleweight, super middleweight and light heavyweight.

Most significantly, he is a promotional and broadcast free agent following the early November settlement of his breach of contract lawsuit against now-former promoter Golden Boy Promotions, CEO Oscar De La Hoya and streaming service DAZN.

Alvarez forfeited the remaining $280 million and eight fights remaining on his deal in return for free agency, which means he can work with any promoter or broadcaster to secure the fights he wants and do so on a fight-by-fight basis or, at worst, under short-term deals for, say, two or three fights at a time.

It’s an incredible position for Alvarez to be in as no fight he wants – and he wants to consistently fight the best opposition and biggest fights, as he has done since 2013 – should go unmade due to promotional or broadcaster conflicts. If the fight he wants is against a Top Rank fighter, he can make a deal with Bob Arum and fight on an ESPN platform. If there’s an opponent in the Premier Boxing Champions stable he is interested in he can work with Al Haymon and fight on either a Fox or Showtime platform. He can work with Eddie Hearn, who has an output deal with DAZN, and fight there again. He could even do the same with Golden Boy, and don’t laugh. Reunions, in the name of economics, are not out of the question. Even after De La Hoya had a bitter breakup with Arum and they went their separate ways they ultimately reunited to do more fights together on short-term deals. 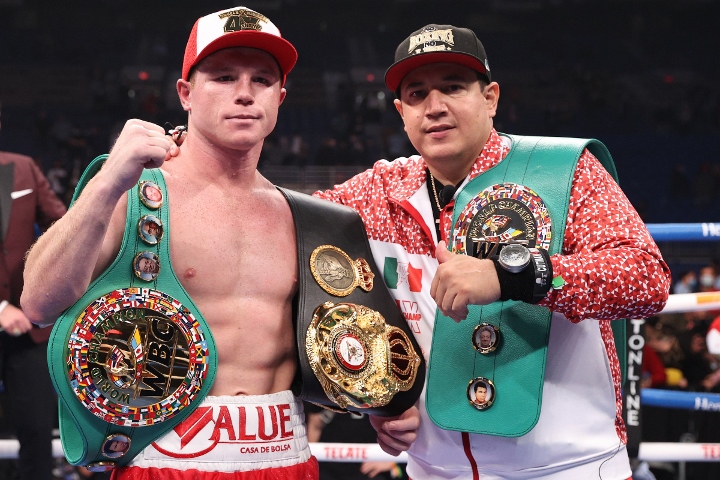 The point is that Alvarez, at age 30 and still seemingly in his prime, has his pick of many interesting fights that will still earn him untold millions despite walking away from hundreds of millions left on his previous contract.

After a 13-month layoff caused by the coronavirus pandemic and the lawsuit, Alvarez returned to the ring with a vengeance on a one-fight deal with Hearn and beat down and easily outpointed Callum Smith on DAZN to take his WBA super middleweight world title and win the vacant WBC title on Dec. 19 at the Alamodome in San Antonio, where he sold out the roughly 15,000 tickets available.

Alvarez (54-1-2, 36 KOs) has now won major titles in four divisions from junior middleweight to light heavyweight and although he won’t ever see the 154-pound junior middleweight division again he specifically said after thrashing Smith that he could still go down to middleweight for the right fight.

He showed in his previous fight in November 2019 that he could also handle bigger opponents at light heavyweight, where he scored a spectacular 11th-round knockout of Sergey Kovalev to claim a 175-pound belt, which he ultimately vacated in order to return to the 168-pound super middleweight division. Alvarez also said repeatedly before and after fighting Smith that his immediate goal is to unify titles at super middleweight.

Since Alvarez fought only once in 2020 he apparently wants to fight three times in 2021 beginning with a possible quick return in February to face WBC mandatory challenger Avni Yildirim (21-2, 12 KOs), who stepped aside to allow the fight with Smith to happen. The fight would likely be in Mexico, Alvarez’s home country, where he has not fought since drilling Kermit Cintron in defense of his junior middleweight title in November 2011.

That would leave plenty of time for Alvarez to get back on his preferred schedule of fighting on Cinco de Mayo weekend in early May and Mexican Independence Day weekend in September.

So, assuming he gets rid of Yildirim in an anticipated blowout, what are the biggest fight options for Alvarez in the immediate future?

1. Gennadiy Golovkin (41-1-1, 36 KOs): Obviously, it’s the biggest mainstream fight available for Alvarez, who is 1-0-1 against GGG in a pair of terrific battles that ended in controversial decisions and turned what began as a friendly rivalry into one as bitter as any in boxing. Alvarez seems content with his results against GGG, no matter how controversial, and appears to relish keeping him from the massive payday a third fight would bring him. Golovkin defended his middleweight belt in a wickedly one-sided seventh-round knockout of obscure mandatory challenger Kamil Szeremeta the night before Alvarez battered Smith. GGG has wanted the third Alvarez fight since their last meeting in 2017.

Maybe Alvarez will give it to him, but if he does, Alvarez will drive a hard bargain and probably force Golovkin up to 168 pounds. If there is a ray of light that it will happen it’s that Alvarez said he enjoyed working with Hearn on the Smith fight; Eddy Reynoso, Alvarez’s manager and trainer, has lauded Hearn’s efforts and even signed another fighter he manages, junior flyweight world champion Hiroto Kyoguchi, with him this week; and Hearn also works with GGG.

If anyone can broker the deal it’s Hearn, who is perhaps boxing’s best dealmaker. Regardless of those details, a third fight with GGG is clearly Alvarez’s biggest and one of the biggest in boxing – still.

2. Caleb Plant (20-0, 12 KOs): Before Alvarez made the deal with Hearn to fight Smith, his team held serious talks with Haymon about a deal with PBC. A fight with super middleweight titlist Plant was part of those talks. Before he faced Smith, Alvarez acknowledged the Plant talks and a fight with him would get him closer to his goal of unifying the division. A win would give Alvarez three of the four belts.

Plant, who says he wants to fight Alvarez, would give him a very marketable, undefeated opponent to face in a title unification bout.

3. Jermall Charlo (31-0, 22 KOs): Charlo, who is with PBC, owns a middleweight title, which Alvarez also still does, so this could be a unification fight or Alvarez could entice him up to super middleweight. Either way, it’s an interesting match that is very marketable with Charlo very capable and good at playing the villain role. Texas is one of the few places that is allowing spectators, at least with limited capacity, and Alvarez is a proven draw there thanks to his legions of Hispanic fans. But Charlo is from Houston and has his own fan base as well. Charlo also is coming off his first foray on PPV, which he shared with his brother, Jermell Charlo, on Sept. 26. The card did a bit over 100,000 buys, which is by no means a blockbuster, but given the circumstances of the times, it wasn’t bad either. He certainly has room to grow as an attraction and would make a strong B-side to Alvarez.

4. Artur Beterbiev (15-0, 15 KOs): Beterbiev is not the most well-known fighter but he is the unified light heavyweight world champion and a devastating puncher. He may well be the single most dangerous opponent Alvarez could face between 160 and 175. He is also with Top Rank, which is very capable of promoting the fight, legitimately so, as Alvarez’s biggest test by far. ESPN would get behind it and turn it into a possible pay-per-view bonanza.

If Alvarez has a desire to return to light heavyweight and test himself once again, it’s Beterbiev or bust, assuming Beterbiev retains his titles against Adam Deines on Jan. 30.

5. Billy Joe Saunders (30-0, 14 KOs): If Alvarez truly wants to be undisputed champ, Saunders would hold the key, assuming Alvarez first beats Plant. Hearn promotes Saunders and probably could make the fight, especially since the deal was done and they were due to meet this past May before the coronavirus shut down the sports world and the fight was cancelled before it could formally be announced. In the ring, Saunders’ style is an eyesore to watch but he plays the villain role to the hilt and who wouldn’t want to see Alvarez give him a beating and take his title? Being able to promote the fight as being for the undisputed title would make it a big deal.

6. Errol Spence (27-0, 21 KOs): Spence, who is with PBC, is a unified welterweight titlist who was ringside for Alvarez-Smith. He wants to eventually face Alvarez and Alvarez has acknowledged that he’s interested. It’s the kind of fight that could pack AT&T Stadium in Arlington, Texas, where Spence, who is from the region, and Alvarez are already proven box office stars. It is a massive fight, just not yet. Spence is two divisions smaller and has a huge fight he needs to make in his own division first. If he fights and beats Terence Crawford to unify titles then, by all means, let’s see it. But it’s probably at least a year-plus away.

7. Demetrius Andrade (29-0, 18 KOs): Middleweight titlist Andrade is desperate for a big fight and would happily fight Alvarez at 160 or 168. He is with Hearn and DAZN and was a commentator on Alvarez’s fight with Smith, where he talked up fighting Alvarez. He can talk up a storm too, and would excel in the spotlight of promoting a big fight. He’s a superb technical boxer and a southpaw and not an opponent Alvarez needs to fight, but maybe he just might give Andrade a chance since Alvarez fears no fighter or style. If he was willing to face savvy boxers in their prime such as Erislandy Lara and Austin Trout why not Andrade?

8. David Benavidez (23-0, 20 KOs): Alvarez against former two-time super middleweight titlist Benavidez, who is with PBC, would be a guaranteed action fight between a Mexican and Mexican-American. It would probably do well on pay-per-view and sell a lot of tickets. Benavidez has an appealing personality and is good at hyping up his fights.

9. Dmitry Bivol (17-0, 11 KOs): Bivol owns a light heavyweight title but is small for the division and has repeatedly said he’d fight Alvarez at 175 pounds or at 168. He has pound-for-pound level talent but has no serious fan base and doesn’t make the best fights. It would be a surprise to see Alvarez go in this direction.

10. Ryota Murata (16-2, 13 KOs): Alvarez has said he wants to fight around the world and a trip to Japan to face secondary middleweight titlist Murata would be huge there but not so much where the real money is -- in North America or even the Middle East.

Benavidez for Cinco de Mayo, and Saunders for September.

Canelo needs to drop the belts at 160 if he's not going to defend them.

Maybe when Canelo stops his fight tour of the UK's bums he'll fight someone who poses a threat and not just someone he knows he can beat.

[QUOTE=robbyheartbaby;20979459]I'm getting in before the haters. Line them up Canelo will knock them down he's hands down the man in boxing right now and always willing to fight the best. I look forward to watching him rule boxing for the…

[QUOTE=eco1;20981241]There are rumors Canelo wants to give Kirkland a rematch, lol.[/QUOTE] Let me guess, you started those rumors?