Sonny Fredrickson has been a man of routine throughout his career.

Under normal circumstances, he would train at the Glass City Boxing Gym in Toledo with his trainer Lamar Wright, he might spar Robert Easter Jr. in preparation for his bout, and then arrive on fight night with the same crew he’s kept together for years. But that routine, much like it has for other fighters and people around the world, has been disrupted, even though he is one of the fortunate ones to have a fight on the schedule right now.

Fredrickson is set to face Alex Saucedo in a main event bout on June 30 at the MGM Grand in Las Vegas, Nevada as part of Top Rank on ESPN’s first run of empty venue shows in Sin City. The promotional outfit will hold events on June 9, June 11 and June 16 as well. The top billing for Fredrickson-Saucedo is an upgrade from the off-TV slot it was originally slated for in late April on the undercard of Naoya Inoue-John Riel Casimero, which was cancelled due to the COVID-19 pandemic.

Prior to lockdown orders, Fredrickson had already sparred 100 rounds with Easter as the two prepared for respective bouts on the docket. Then the world changed, and his training had to adapt along with it.

“It was a little frustrating at first when it got cancelled. I tried to stay positive about it, but when it got cancelled it was a little upsetting. When it happened, I was like okay, maybe the timing is better, stay positive about it,” said Fredrickson. “I've just made sure that I've been consistently running. Running and doing the little things that I can do at home, sit ups, pushups, pull-ups, shadowbox.”

Camp has now moved back into a boxing gym, but not the one he’s grown up as a fighter in, at least not until next week at the earliest. He and Wright have a friend in Toledo who just to happens to have the quarantine home gym every person still under stay-at-home orders dreams of: A four car garage with a boxing ring in it, and all of the other fighting accoutrements. 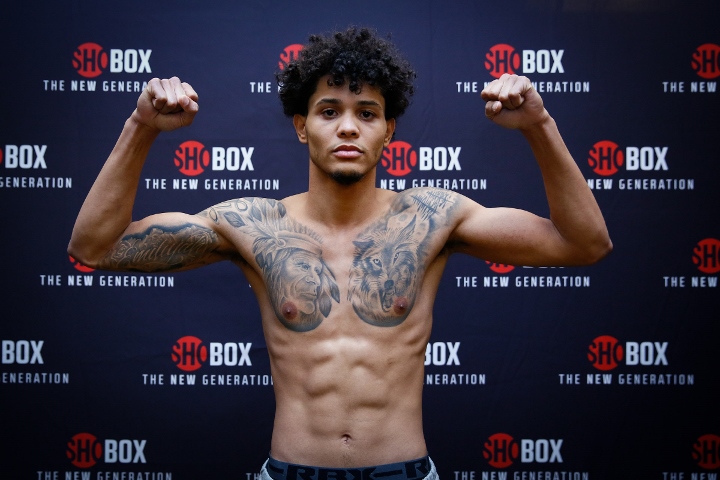 But the change isn’t necessarily a bad thing. After a loss to Samuel Teah in late 2019, Fredrickson decided it was time to reevaluate his level of focus heading into bouts. As a once-beaten contender who had a decorated amateur career with a record of 120-8, he was the prohibitive favorite heading into the fight. He says he didn’t take Teah seriously enough, and wound up getting edged out on the scorecards as a result.

Coming off a loss and then waiting at home during a pandemic not knowing when you might have the chance to fight again and get back in the win column is a sobering feeling, but Fredrickson says it made him appreciate his opportunities even more.

“He was a good fighter. I should have never, ever done that,” said Fredrickson. “But, I feel like maybe Alex Saucedo's team, they're seeing that I lost to that guy and they're overlooking me, and that's a mistake they're going to make. I know now that every opportunity that presents itself, I have to take advantage of it. I'm 100% prepared, I'm 100% focused, I can't look past nobody.”

Saucedo is an easy opponent for him to not overlook, because he knows exactly what he brings to the table. The two sparred back in 2015 during the lead-up to Canelo Alvarez’s bout against Miguel Cotto (Cotto was aligned with Roc Nation, whom Frederickson was signed with before moving on to his current promotional outfit, DiBella Entertainment), and Fredrickson feels he accounted himself well. In addition to his memory of that session though, he’s leaned heavily on an old hobby, tape study, especially when training circumstances are less than ideal.

“We've definitely watched the Maurice Hooker fight a few times. I've watched it over and over again, just watching his habits and what he does,” said Fredrickson. “He's flat-footed almost, he likes to stand still. For him to get off, I have to stand still. As long as I keep moving, using my jab on him and use my size and range, I feel like I can dominate the fight.”

Tapes of Saucedo are just about the only modern boxing Fredrickson says he watches, as he prefers to study tapes of older fights and fighters. As a kid, he grew up watching classic boxing marathons on ESPN Classic, and now he likes to revisit the fighters he saw and heard about when he was younger, but was too young to appreciate. Just yesterday he revisited the Bernard Hopkins-Joe Calzaghe pay-per-view.

Action won’t be hard to find against Saucedo, who has developed a reputation as one of the most exciting fighters in the sport thanks to back-to-back barnburners against Hooker and Lenny Zappavinga in 2018. This time around though, there won’t be any fans erupting in the crowd—or any fans at all—creating a unique environment neither fighter has fought in when it comes to an actual sanctioned bout.

Even his corner will be pared down—Frederickson has been told that each fighter will get one cornerman, and a cutman will be provided, meaning Wright’s voice will be the only voice he’ll hear other than perhaps the ESPN commentators.

The strategy for managing that, as well as for beating Saucedo, is the same.

“It’ll be just like a sparring session,” he said.