Fredrickson: I'll Shock Saucedo With My Power; I'll Be Able To Stop Him

Fredrickson feels Saucedo’s defensive flaws still will lead to him pulling off an upset Tuesday night in Las Vegas. Oddsmakers have installed Saucedo as a 9-1 favorite before their 10-round, 141-pound bout, but a confident Fredrickson is looking forward to disproving doubters in the main event of ESPN’s four-bout broadcast from MGM Grand Conference Center.

“It’s definitely gonna be a fight that when I win it’s gonna be shocking to people,” Fredrickson told BoxingScene.com. “And I think it’s really gonna put my name out there a lot more, and it’s gonna get me bigger opportunities. This is definitely my shot, honestly. This is a do-or-die fight for me almost.” 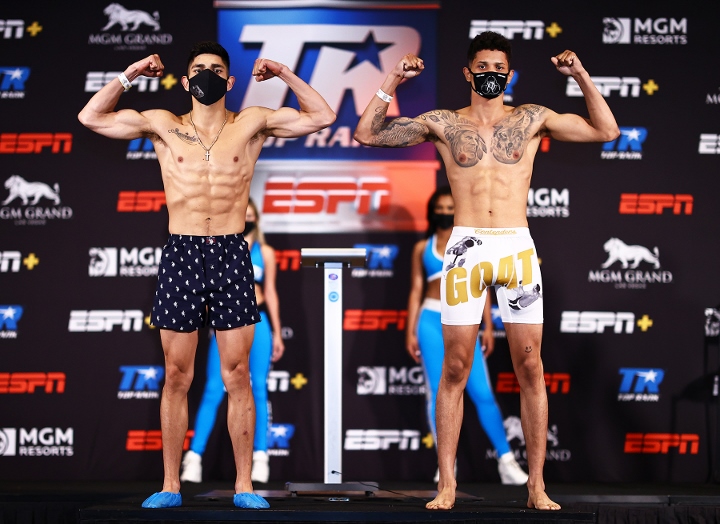 Fredrickson believes he did enough to defeat Philadelphia’s Teah, though he doesn’t think he would’ve gotten this opportunity had he won that bout.

The 26-year-old Saucedo (29-1, 19 KOs) will fight for just the second time since Maurice Hooker dropped and stopped him in the seventh round of their fight for Hooker’s WBO junior welterweight title in November 2018. Saucedo knocked Hooker to the canvas early in the second round of that fight in Oklahoma City, Saucedo’s hometown, but Saucedo faded and suffered his first professional defeat.

“He came out real strong,” Fredrickson said. “He has good offense. He hurt Hooker early, but then he kind of threw himself out. Then, I don’t even think Maurice Hooker missed a right hand. He has poor defense. I just remember how bad his defense was.”

“I feel like I’m gonna shock him with my punching power, honestly,” Fredrickson said. “I feel like eventually, as the rounds go on, the same way Maurice Hooker did, he threw himself out a little bit. He gets tired, gets fatigued in his fights a lot. So, I feel like as long as I just stay focused and don’t take no punishment early on, I’ll be able to stop him.”

There’s been a few upsets recently so why are the bookies so afraid to pull the trigger on the underdog? We already had Plania, Franco, why not Fredrickson? For all we know, Saucedo could have an off night from nearly…

Remember Saucedo vs Zappavinga, Alex looked like a heavy bag. I like Alex, he is a rugged guy, but he can't spell defense. 9-1 is way out of line, looks like another good bet.

Remember Sonny against Ergashev, he looked like a freshman vs prof