Hall of Fame trainer Freddie Roach admits that when he first observed WBA "regular" super featherweight world champion Alberto "El Explosivo" Machado move inside a ring, he immediately noticed some deficiencies that had to be corrected.

Three training camps later, Roach is very impressed with the fighter and convinced that Machado is on track to be one of the best 130 pounders in the division.

Later tonight, Machado will risk the World Boxing Association (WBA) belt against Yuandale Evans in an HBO televised co-feature at the Hulu Theater at Madison Square Garden in New York. 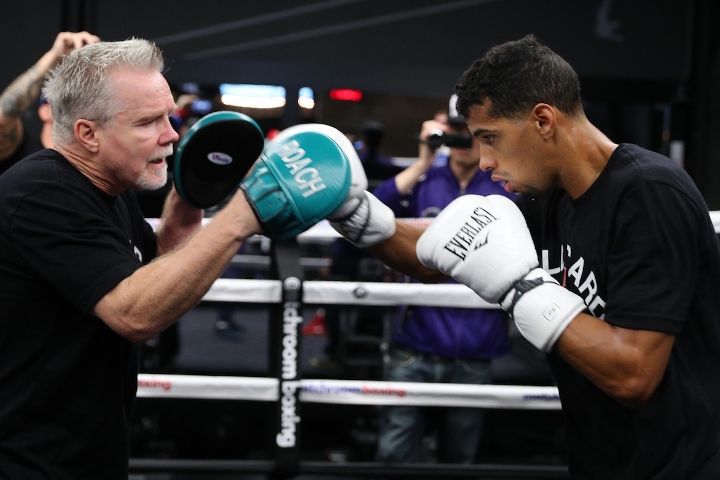 Machado, who is co-promoted by Golden Boy Promotions and Miguel Cotto Promotions, is hoping to secure a major fight in the near future.

"The problems that he had with his leg movements do not exist anymore, Machado learned how to cut off the ring and catch the opponents in the corner. The better use the legs... that's where the power comes from to hurt [the opponent], especially with the jab," Roach informed Carlos Gonzalez.

"We've talked a lot about how to get the most out of his height and length, particularly against smaller opponents, that's when the footwork is important."

Machado captured the title in October 2017 when he knocked out Jezreel Corrarles in eight rounds. This past July, he dominated Rafael Mensah for 12 rounds en route to a unanimous decision. Evans appears in ninth place in the WBA rankings.

"We are risking the title against a good opponent that I am sure will bring out the best of Machado, we have the advantage in height and reach, and he has matured and understands, and he knows how to avoid falling backwards against the ropes an dhow to control the fight with his boxing," Roach said.

"We had excellent sparring against several world champions, so we are ready for Evans."

Whatever. I just bet against Machado.