Frank Warren To Have Serious Conversation With Yarde, Coach

Frank Warren wants to have a “proper grown-up conversation” with Anthony Yarde and his trainer Tunde Ajayi in the wake of Yarde’s defeat to Sergey Kovalev in Russia at the weekend.

Yarde was knocked out in the 11th round in his attempt to claim the WBO light-heavyweight title in Chelyabinsk, having looked on the verge of victory in the eighth round.

Warren, Yarde’s promoter, saw the defeat as a wasted opportunity, although he wants Yarde back in the ring soon after establishing that he can compete in world class, despite only having had a combined total of 30 amateur and professional bouts before his big shot. 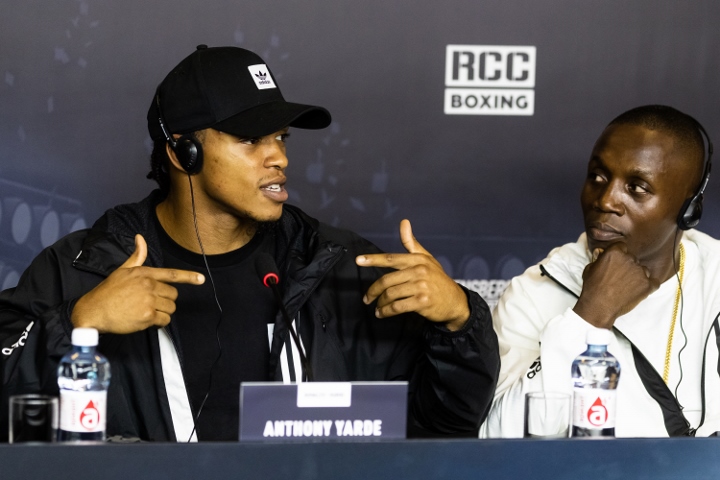 Ajayi came in for criticism on social media before and after the fight, but Warren wants to ensure they are on the same page headed forward.

“We are going to sit down and have a proper grown-up conversation and if people’s feelings get hurt, then they get hurt,” Warren said.

“I want Anthony to get out in late November or December. He didn’t get bashed up out, he was gassed at the end and that was the end of it. But he showed that he can compete at that level. That’s what he had to prove going into the fight. He made a name for himself as a world-class fighter.”

Warren believes that 36-year-old Kovalev was an easier fight than the division’s other champions and questioned Yarde’s tactics during the fight.

“You learn from it, the kid has a natural ability,” Warren said. “People were asking why we didn’t wait for Anthony to have another two fights before putting him in with Kovalev, but the reality is that Kovalev wouldn’t have been around in another two fights.

“This was the right time to get Kovalev. The other champions in the division are younger and hungrier.”

[QUOTE=wrecksracer;20028817]Toney shouldn't have fought as long as he did, and should have never fought at heavyweight. He started out at Middleweight. Sparring wasn't his problem. Taking heavyweight punches to the head was.[/QUOTE] Let's keep to reality for a moment; how…

[QUOTE=alexjust;20028646]He is in a wrong sport if he wants to limit punches to the head to the fight nights. It doesn't work this way. It's just doesn't. Yes, he guided him to top 25, but his level of opposition was…

[QUOTE=Scipio2009;20028774]You may be right; still, that's not the point. No idea how Toney is doing managing his affairs, but the man can barely have a clear conversation now because he only needed to spar to get ready to fight. Ajayi…

[QUOTE=wrecksracer;20028600]Toney is 10 times the fighter Yarde will ever be.[/QUOTE] You may be right; still, that's not the point. No idea how Toney is doing managing his affairs, but the man can barely have a clear conversation now because he…