Frank Warren becomes the first promoter to stage a show in the UK since the coronavirus pandemic on Friday night, but he will not be there to enjoy it.

Brad Foster defends his British and Commonwealth super-bantamweight titles against James Beech Jr in the headliner at the BT Sport Studios in East London. But with numbers strictly limited, Warren will be staying at home.

“I'm not allowed to go,” Warren said. “I've had all the tests done but they are so limited for space there I can’t go. Only essential people can be there. I’m not essential enough!” 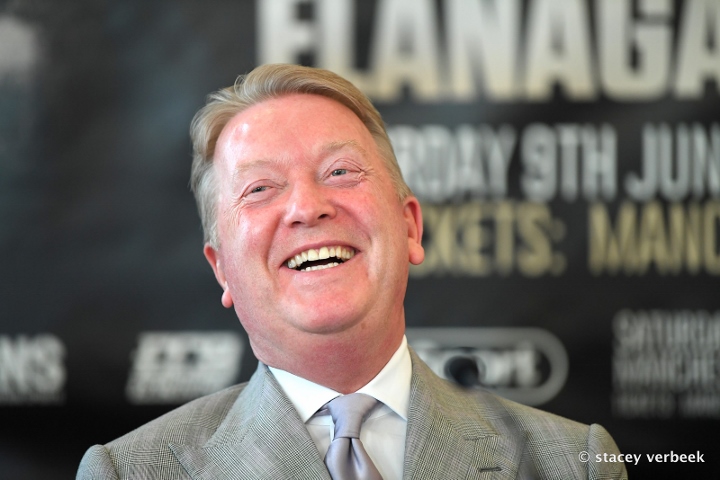 Instead, BT Sport will be sending a camera to Warren’s home to get his reaction to the action. So, while disappointed he will not be there in person, the practical difficulties of attending the behind-closed-doors show under the British Boxing Board of Control protocols meant he would not have got his regular seat anyway.

“The fact of the matter is I can't sit ringside and it's not like I could go in the dressing rooms,” Warren said. “It's the first one and I'm not going to argue with anyone. The objective is we run as safely and smoothly as possible.

“If I have to sit at the back of the venue, I might as well watch on television as I'll get a better view. They're going to bring a TV camera round to my house and I'll do my stuff from here.”

He doesn’t like to miss his big shows and becoming the first UK promoter to return to action after the pandemic is quite a coup. On Thursday he announced four more shows for the summer and is hoping the delayed Daniel Dubois-Joe Joyce heavyweight clash will take place in October, providing crowds are allowed back by then.

But Warren knows that this show will be a big step on the road to returning to normal.

“Most of the shows people ask ‘Are you nervous?’ and I never am, as what is going to be is going to be,” he said. “With this happening, for some reason I feel a bit nervous. I want it to be good and I want our viewers to enjoy it.

“I’m focused on making sure we deliver. It's good for us, it's good for BT and more importantly it's good for the viewers and boxing. I will do whatever it takes to make it go well. It is a really good quality card.

“A lot of people want their family and friends there but we can't have it. The maximum we can have in the building is about 65 people. We can't even have all the boxers in there at the same time.”

Warren said that boxers had been put on standby as reserves in case of any positive tests, but so far, so good.

Battling back from the lockdown has been one of the most difficult times in Warren’s promotional career, though, which stretched back 40 years.

“I've been shot, I've had fights with people and I’ve had all sorts of ups and downs in my life but this has been a big challenge because we are all in no man's land,” he said. “Whoever thought we would be putting boxing on without a live audience? Who thought at Christmas or in January we would be in this position? Everyone's world is upside down.

“The challenge for us was to get boxing on as soon but as safely as possible. We had health guidance, we had a company come in to clean the ring after every fight, they're cleaning the dressing rooms, the referees will have a shower after every fight, there are all sorts of safeguards having to be put in.

“It is paramount to us that everyone is safe and secure. Everyone in there has to be in a safe environment. Logistically it has been tough. It has also been very expensive, we wouldn't get it on if we didn't have these safeguards in place. Everyone has to be tested, they're not tested once and some have had to be tested three times. We have people locked down in hotels, referees are on lockdown, even the doctors are locked down and they want to get paying for their time.

“We are determined to get boxing on and it stays relevant as a sport to stay up there with the other sports.”

I am glad that UK boxing fights are back. This Friday boxing card was decent. Glad that we have more options to see boxing fights. :boxing:

I been shot, I ain't scared of no covid.

That's right Frank.. Crusties ain't allowed out in groups yet...