Frank Warren: Fury Has The Tools To Beat Them All Comfortably

TYSON FURY SAID he was after a taller order following his first comeback fight at the Manchester Arena in June and now he has got his wish – in more ways than one.

Tyson’s June date was always just about getting him back out on the canvas again after such a prolonged layoff and the shedding of a huge quantity of excess baggage from around his midriff.

It was a worthwhile exercise against Sefer Seferi because it confirmed to Tyson himself – and the watching public – that he has truly got his appetite and love back for the sport. 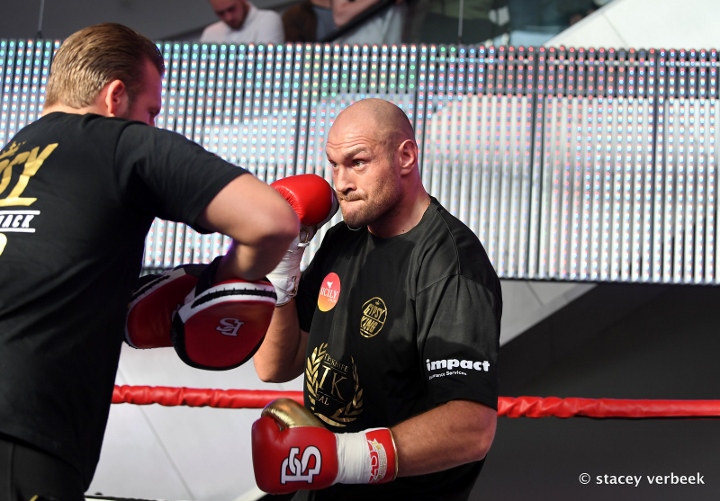 The fans inside the arena made it an incredible experience for all concerned and reminded the lineal heavyweight champion of the world of what he had been missing during his two and a half year absence.

The second fight of Tyson’s second coming falls on August 18 at Windsor Park in Belfast on the undercard of Carl Frampton taking on Luke Jackson and Paddy Barnes bidding to relieve Cristofer Rosales of his WBC world flyweight title.

This time around he will take on the German Francisco Pianeta, an active heavyweight with 40 fights under his belt, who has also mixed in good company.

The 6ft 5″ southpaw has lost just four fights out of his 40 and all of those have come in world title challenges, albeit two of them for the IBO belt.

His first and main shot at the big time came in May 2013 when he took on the then adopted German Wladimir Klitschko for his belt collection – later won by Tyson – and was stopped just before the end of the sixth round.

He also challenged for the WBA title against Ruslan Chagaev in 2015 before his two tilts at IBO honours in 2017 and earlier this year in June.

Before his title challenges, Pianeta built up an unbeaten record of 29 fights.

The ideal for us in Belfast would be to get some worthwhile rounds into Tyson. I don’t believe we will have him playing up to the crowd on this occasion because he will need to be more business-like in a riskier fight and also because of his desire to start putting a marker down once again in the heavyweight division.

Tyson informs me that he has shifted a bit more weight since his first return and this fight is about continuing to nudge him towards optimum fitness, which is where he needs to be before he is really stepped up.

That being said, people will always talk about giving him a proper step up, but I don’t think any of them will really represent a formidable obstacle once Tyson is fully on his game. The truth of the matter is that it is all about his fitness levels, that’s all it is at the moment.

He is one of these fellas that has got natural fitness, but you do need that ring sharpness and to be at your absolute best when you step in there.

The only way to get to this point is to do it the way we are doing because there are no short cuts to it.

Once he is 100 percent fitness-wise and fully back in the game there is nobody you wouldn’t put Tyson in with because he has got the nous and the tools to beat them all comfortably.

Before we get to that point he has got a job to do against Pianeta and I am looking forward to seeing Tyson continue to get back towards his old self in front of a packed out stadium in Belfast.

Fury has the tools to beat any HW who ever pulled on a pair of gloves ... but can he find the key to unlock his tool box? I hope so, but we'll have to wait and see.

Let him have his comeback fights first people, if he's lost it then he will have a tough night with Pianeta. Either way his performance will indicate whether he can make it back to the top, I for one will…

what does he know? he's never thrown a punch in his life?